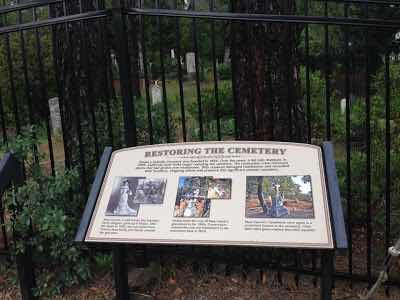 A state park sign marking the restoration of the historic Shasta Catholic Cemetery. This photograph was taken by Jeremy Tuggle on April 28, 2016.

In 1855, a Catholic Cemetery was established at Shasta. This cemetery is located on the hillside above the Pioneer Union Cemetery. Today, its known as the Shasta Catholic Cemetery. Sadly, the cemetery fell into disrepair and vandals continued vandalizing the head stones well into the 1980s. Under the direction of the California State Parks in 2005, this cemetery was cleaned up and restored. A black gate was placed around its perimeter complete with a lock. This locked gate helps prevent further vandalism to the headstones of the early Shasta pioneers who are buried here with their families.

Among those people buried here is a German immigrant by the name of Henry Blumb. Blumb arrived in California by the way of Panama in 1854 and he settled at Shasta during the latter part of the 1850s. At Shasta Blumb was naturalized as an American citizen on January 22, 1859, by the District Court of Shasta County. During the following year he married his wife Mary Garrecht, also of German descent.

In 1878, Henry Blumb acquired a building along Main Street at the corner of Boell Alley which formerly housed the U.S. Bakery, established in 1859 by Charles Boell who the alley way is named for. After Blumb bought it, he renovated it and turned it into a thriving saloon and bakery. He operated it until he had a stroke in 1918. Blumb died in 1924. His wife Mary preceded him in death in 1919, and is buried next to him.

An Irish immigrant by the name of Patrick Mullee, and his wife Ann, were residing at Iowa County, Wisconsin in 1850. This is where was Patrick Mullee was naturalized as an American citizen on October 28, 1850 in the Circuit Court of Iowa County. At a later date, Mullee relocated his family from Iowa County, Wisconsin to California where they settled at Churntown, in Shasta County, and he became a merchant who owned his own store.

Churntown was one of the original 1849 gold mining communities of Shasta County. Mullee is recorded on the 1867 Great Register of Shasta County, but this document misspells his surname as Mulee. Three years later, Mullee became a miner according to the 1870 U.S. Census. The 1870 U.S. Census notes that Patrick Mullee was age 55, Ann was noted at the same age, and their daughter Winnifred was age 20.

Another pioneer by the name of Theobald Garrecht  (D. April 18, 1875) was a native of Offenbach by Landau, Rheinptaltz (Bavaria). Garrecht departed his native country in 1860 and he arrived in the United States of America. In America, Garrecht, ventured towards the West Coast and settled at Shasta, California, that year. Garrecht was employed as a saloon keeper. Theobald married a woman named Catherine.

Five years later, tragedy struck the Garrecht family when Theobald & Catherine’s daughter, Apollonia (Garrecht) Wentz died on December 21, 1865. She wasn’t buried in the Shasta Catholic Cemetery. Her remains ended up being interred in the Shasta Masonic Cemetery located on Muletown Road just south-west of Shasta. Apollonia married Henry Wentz. The following year, Theobald Garrecht was naturalized as an American citizen in the District Court of Shasta County at Shasta on May 14, 1866. He then registered to vote in July of that year. In 1870, the pioneer was still employed as a saloon keeper, he and his wife Catherine were living in the home of their son Lorenz Garrecht, a prominent Shasta butcher.

There are many other notable Shastan’s who are buried in this historic cemetery. According to my research the last recorded interment in this cemetery was that of James Stephen Coughlin Sr., in 1936. At different times the Shasta State Historic Park offers cemetery tours of both the Shasta Catholic and the Pioneer Union Cemetery, explore it when you can. 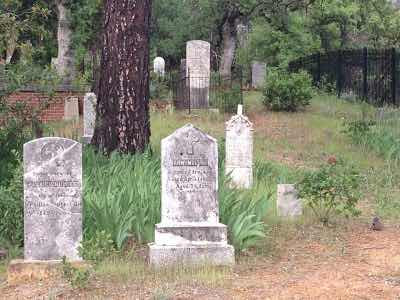 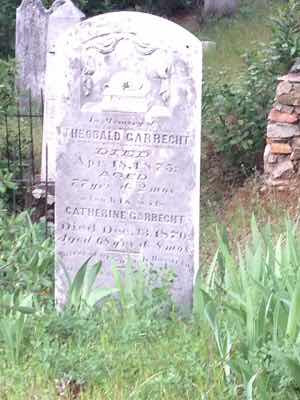 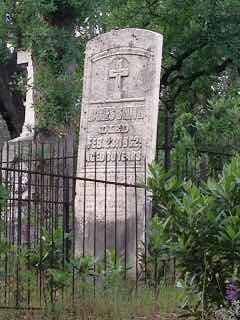 Above: the headstone of James Smith who died February 23, 1862. Smith was a native of Parrish of Lava, County of Cavin, Ireland. This photograph was taken by Jeremy Tuggle on April 28, 2016.


RESOURCES:
REPORT  of the Proceedings of the Board Of Supervisors, For May Term 1855 - The Shasta Courier newspaper of Shasta, June 9, 1855

The Blumb Bakery, a publication by Shasta State Historic Park