On a technicality my newest YouTube video was deleted based on the history of the Stillwater Indian Cemetery. I shall have something new within its place soon. Best wishes!

Posted by Jeremy M. Tuggle at 4:55 PM No comments: 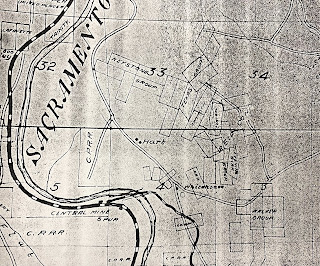 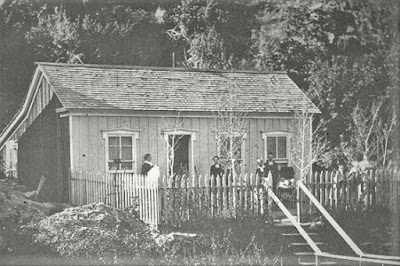 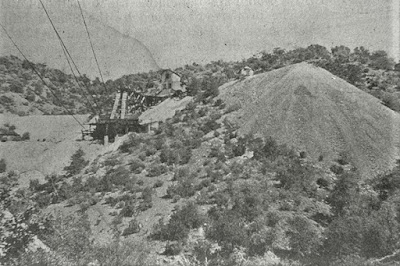 Above: the aerial ore car tramway of the Reid mine showing its cables in midair and tailing (dump) piles. Date unknown. Courtesy of Shasta Historical Society.
During September of 1915, locals raised a subscription of money to erect a brand-new footbridge which spanned the Sacramento River to give them access to the railroad at the Central Mine Spur or Central Spur. This footbridge was 303 feet and had a footway of four feet wide. It was a sturdy structure which didn’t sway back and forth and was safe to cross the river.
A quarter mile north of Central Spur was Cuargo a railroad siding and stopping place, also in the Old Diggings mining district. Cuargo was the original train stop for Old Diggings residents. Yet, it was Alfred A. Anthony, an active miner in the area, who was responsible for leading the footbridge project and getting the railroad to stop at Central Spur instead of Cuargo. 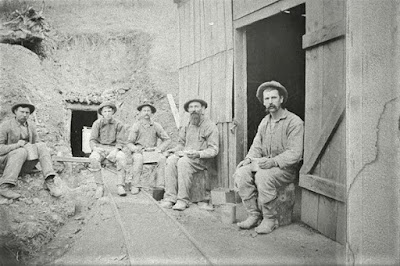 Above: the miners of the Mammoth Company are sitting next to a building and the adit of the main haulage tunnel of the Mammoth mine at Old Diggings. Circa 1915. Courtesy of Shasta Historical Society.
Recently, the bridge at Cuargo was washed away due to high water and wasn’t repaired by the railroad company. It was Anthony who was responsible to have them stop at the new footbridge at Central Spur. Now Old Diggings had access to Redding by train again. The year 1915 marked the final year of operation for the Old Diggings Railroad which had been in operation for eight years.
Then, in 1918, Harvey J. Sallee was appointed as postmaster by the United States Postal Service headquarters in Washington D.C. to the became the first and only postmaster of the Old Diggings post office. Sallee held onto his position until the post office was discontinued until November 30, 1927, when the U.S. mail for that town was rerouted to Redding for delivery.
By 1933, the production notes for the Texas Consolidated Quartz mining property records its gross production up-to-that-year to be $750,000, and between 1938 and 1939, owners of that mine at Old Diggings cleaned out 1,500 feet of the historical workings on that mineral land. This property was last owned by the estate of Evelyn P. Joselyn, of Oroville, in 1974, and since then the production of ore from this mine has been idled with the adits on the property plugged.
Today, nothing remains of the town site of Old Diggings. There is a historical marker dedicated to the memory of the town of Hart at that location, as seen below. Most of the former mines in the area have been cleared out and plugged by the U.S. Bureau of Reclamation for a modern hiking trail system in the vicinity. Other mines, like the Reid mine still exist but are located on private property at the end of Walker Mine Road. A portion of the historic aerial ore car tramway of the Reid mine is still in existence today, just located off of Freitas Overlook Trail. The townsite of Old Diggings have certainly lived up to its name. 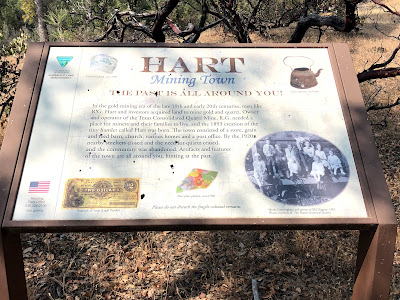 Above: this commemorative sign was placed by the U.S. Department of the Interior - the Bureau Land Management at the historic townsite of Old Diggings also known as Hart. This photograph was taken by Jeremy Tuggle on September 17, 2020.
RESOURCES:

From Buckeye District - The Shasta Courier newspaper of Shasta, May 1, 1858

Filmed on location October 21, 2022.
Learn about this unique cemetery which dates back to 1898, and includes a biography of the founder of this cemetery and the contributions he made to our society in the area which, William R. Conant, resided in. Come explore the historic Conant Cemetery. The location just might surprise you. 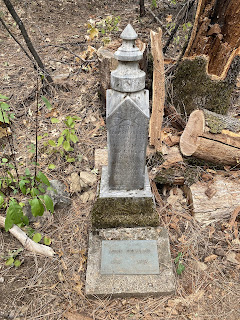 Before 1872, Redding was the end-of-the-line, for the Central Pacific Railroad which became very fortuitous in its role in the development of our county for ten years until the railroad resumed construction of its tracks and laid them north of Redding through the Sacramento River Canyon in 1883. During that year, these hand carved sandstone blocks were mounted and placed by Chinese laborers who were employed by the railroad company to lay tracks over various creek crossings in that region along the Sacramento River.
Now part of the scenic Sacramento River Trail, there function today serves as bridge foundations for a few pedestrian crossings from Salt Creek to Middle Creek. "Thousands of passengers and millions of tons of ore crossed over these foundations utilized by the railroad until 1939, when the railroad was rerouted over the high trestle east of the trail entrance as part of the construction of Shasta Dam." 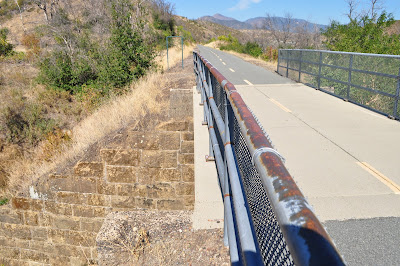 Above: the remaining hand carved sandstone blocks are still intact on the Middle Creek crossing along the Sacramento River Trail. This photograph was taken by Jeremy Tuggle on October 27, 2022. 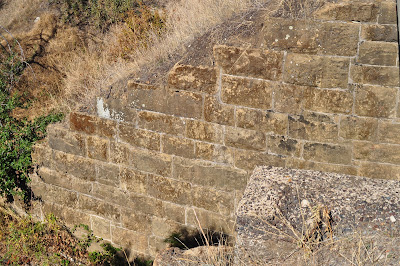 Above: a close-up of the remaining hand carved sandstone blocks at the Middle Creek crossing. This photograph was taken by Jeremy Tuggle on October 27, 2022.
Resources:
Trail plaque at Middle Creek on the Sacramento River Trail
Posted by Jeremy M. Tuggle at 10:03 AM No comments: 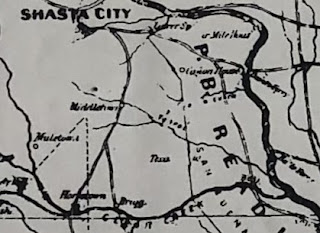 of Shasta County. Note: it's called "Texas" instead of Texas Springs.

Above: the Eureka Schoolhouse is pictured here with Olive (Meyer) Chatham (1881-1980) standing beside it. She was educated here as a child, and later in life, she was employed here as a teacher. She was a daughter of Shasta County pioneers Frederick Valentine Meyer Sr., and Caroline Louise (Notten) Meyer of Cow Creek. This photograph was taken in 1974. This building was demolished in 1980. Courtesy of Shasta Historical Society.
The Eureka School District, of Shasta County, held this school's grand opening on August 3, 1875, which pre-dated the establishment of the town of Bella Vista. The Eureka schoolhouse was a one-room clapboard style structure with a stove. The property included a well on the lot it stood on, and an outhouse. Today, nothing remains of these additions. This building was built primarily for education purposes and community meetings in the Cow Creek region. This area at that location was an agricultural area before it evolved into a busy lumber community known today as Bella Vista.
This building was located a few hundred feet north of Salt Creek and in between the Meyer and Lemm family ranches. It was the only school within the boundaries of the Eureka School District. By the 1970s, the building was left abandoned, and the structure was not brought up to county code and regulations for it to be salvaged. Then in 1980 this schoolhouse was demolished after it was in existence for 105 years. Today, the lot this schoolhouse formerly occupied remains vacant however the landscape hasn’t changed much over the years.
The following is a partial listing of known schoolteachers at the Eureka Schoolhouse:
1887 - Mary (Meyer) Love
1891 - Mary (Meyer) Love
1895 - Annie Durkee
1897 - Mary (Meyer) Love
1899 - Alma Sheppard
1906-1907 - Katherine (Smith) Lemm
1908 - Donna Dennis
1911-1912 - Olive (Meyer) Chatham
1912-1913 - Franklin R. Love
1915 - Ethel M. Williams 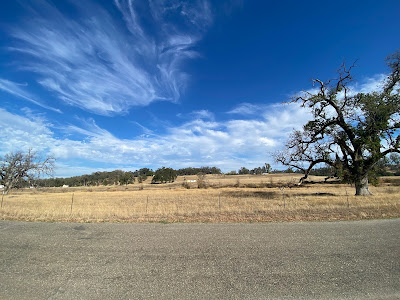 Above: formerly located on this flat surface of grassy land just off of Blue Sky Road (formerly Aloha Road) outside of Bella Vista, and a few hundred feet north of Salt Creek is the site belonging to former Eureka Schoolhouse. This land is located on private property. This photograph was taken by Jeremy Tuggle on September 27, 2022.
Resources:
Shasta County School Districts Plan Merger - The Chico Record newspaper of Chico, March 20, 1920
School Districts of Shasta County, 1853-1955
The Meyer Family written by Edna (Chatham) Wallace and Suzanne Kershaw, The Covered Wagon 1974, published by Shasta Historical Society.
The Meyer Family Memories of Olive (Meyer) Chatham written by an unknown author, date unknown. Available at the Shasta Historical Society.
VF 979.424 Bella Vista on file at Shasta Historical Society
Posted by Jeremy M. Tuggle at 1:03 PM No comments:

This turn of the 20th Century building can be found on the former Yank family property which is now part of the historic Frederick V. Meyer Sr., ranch estate on Cow Creek near present-day Bella Vista, which can be seen in my recent video. It was Joseph Yank an early settler of Cow Creek who settled, early on, on this property which his son William would later acquire. Yank Creek runs through the historic Meyer ranch estate and snakes its way into Bella Vista. Yank Creek was named for Joseph Yank, a local rancher. 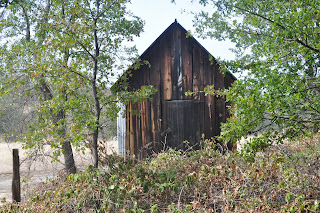 A series of photographs in sequence of the historic Chicken Coup at the Yank family ranch now part of the Frederick Valentine Meyer Sr., ranch estate property. All photographs taken by Jeremy Tuggle on September 17, 2022. See below: 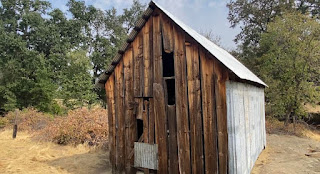 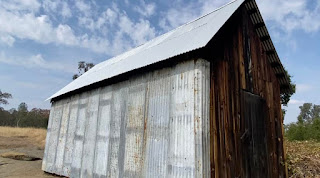 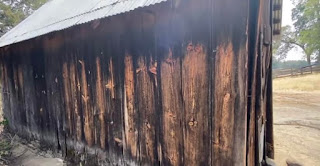 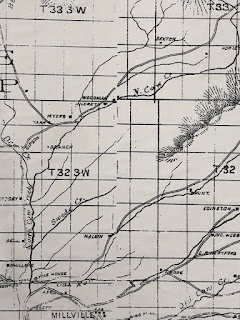 Above: an 1884 map of Shasta County showing the Yank and Meyer family properties on Cow Creek near present day, Bella Vista.
It was William who married Adah Julia Meyer, a daughter of Shasta County pioneers Frederick Valentine Meyer Sr., and Caroline Louise (Notten) Meyer. They raised their family here. This structure was presumably erected by William Yank after the turn of 20th century, he used clapboard style wood and round nails to build it. This structure is a chicken coup which the family utilized for their chickens which they had on their property. It's one of the few remaining structures which survived the 1999 Jones Fire (26,020 acres) that burned through through the historic Meyer ranch estate property. This building is certainly over 100 years old. Watch the video below at the following YouTube link for further info and visuals. It’s located on private property.
Above: The Historic Meyer Ranch: Established 1853.
Posted by Jeremy M. Tuggle at 3:01 PM No comments:

Jeremy M. Tuggle
Redding, California, United States
Jeremy M. Tuggle, born in Redding, is a descendant of 11 pioneer families who settled Shasta County between 1849-1889. Jeremy attended Shasta College and is the author of two published books, Rooted in Shasta County (2003), and A Journey Through Time: Ono and the Bald Hills (2008), as well as various articles on local history. In 2017, Tuggle was awarded a Community Service Award, a prestigious national award for community service in historic preservation, by the Major Pierson B. Reading Chapter of the National Society of the Daughters of the American Revolution. Jeremy is a member of the General Society of Mayflower Descendants in the State of California, and an Eagle Scout. Tuggle is a lifetime member of the Shasta Historical Society in Redding as well. He is currently employed with Walmart Redding as part of their Asset Protection Services Team Associate department.