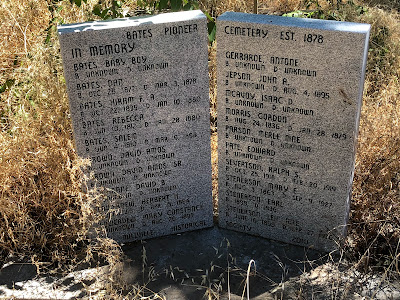 This granite marker which is visible from the road side is in the historic Bates Family Pioneer Cemetery. This historic cemetery was rededicated in 2012 by the Millville Historical Society. This photograph was taken by Jeremy Tuggle on June 23, 2018.

This small and oft-forgotten cemetery is located in the Enterprise area of the Redding city limits. The Bates Family Pioneer Cemetery is located on Rancho Road, and since it’s establishment in 1878, it become the target of vandalism and blight. Today, only a few of the original burial markers remain in this historic cemetery.

The Bates Family Pioneer Cemetery is within the boundaries of the Millville Cemetery District. A granite marker with a 2010 date etched into it was donated to the Millville Historical Society by the Allen and Dahl Funeral Chapel of Redding. Then in October of 2012, the pioneer cemetery was cleaned up and rededicated by revealing the new granite marker which lists the names, birth and death dates of the individuals buried in this cemetery. The Millville Historical Society celebrated in grand style with a potluck and special appearances from the Shasta County Board of Supervisors. The descendants of Salem Bates and his wife Rebecca (Horton) Bates were also in attendance that day.

The first recorded burial in this cemetery is that of Dan Bates who died as an infant child on March 3, 1878, his death remains a mystery to me. He was a son of A.S. Bates and Sophia (Keefer) Bates who are buried in Colusa County, and during my research I didn’t find any relation between them and the Salem Bates family. It appears the A.S. Bates family were passing through the area heading south when their baby boy died.

Salem Bates and Rebecca (Horton) Bates were both natives of Vermont. They were married in the town of West Haven in 1832. They became the parents of four children, two boys and two girls, which were born between 1835-1844, respectively.

Salem Bates led an estrange life. A search for him in the 1870 U.S. Census yielded no results, yet, his wife Rebecca is noted as living with her son Hiram F. A. Baker in Hartford, Ohio, that year. Hiram was a working as a farmer and his mother was unemployed but she kept house. Salem Bates last appeared in the 1860 U.S. Census living at Putah in Yolo County. His occupation was noted as a farmer. He boarded with a man named Benjamin White. There were no other family members who were documented as living with him in California at that time.
Once again, another search for Salem Bates in the Shasta County Great Register of 1879 yielded no results. With this register lacking Bates’ name it suggests that the Bates family arrived in Shasta County sometime after the register was taken or in the early weeks of January 1880. The earliest record I located  the Bates family on is the U.S. Census Mortality Schedules 1850-1880 for Hiram F.A. Baker and his mother Rebecca (Horton) Bates, available on Ancestry.com
Upon their arrival in Shasta County, tragedy struck the Salem Bates family when his son died of heart disease at the age of forty-four, on January 10, 1880. Hiram was soon interred into this cemetery. Eighteen days later, Salem’s wife Rebecca (Horton) Bates died on January 28, 1880 of the same complication as her son. She was interred here as well. After the deaths of his wife and son, Salem Bates settled in township number six of Shasta County, working as a laborer at the age of 70. According to the 1880 U.S. Census, Bates was boarding with the family of John Thompson.
Thompson was a 52 year old broom maker. He was married and had at least two children of his own to provide for. Five years later Salem Bates is living on his own in Pacheco and working as a farmer. He died on March 9, 1894 and he was interred into this cemetery, near his wife. Eventually, additional interments were made in the Bates Family Pioneer Cemetery through the years. The last interment to be made into this cemetery was that of Earl Stenerson in 1936. 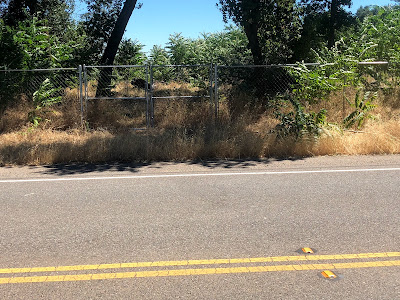 A fence surrounds the perimeter of the Bates Family Pioneer Cemetery on Rancho Road, to keep people out. The cemetery is on private property. All photographs taken with permission. Parking is limited. This photograph was taken by Jeremy Tuggle on June 23, 2018.

Above: fallen headstones covered by plants, weeds and dry grass. This photograph was taken by Jeremy Tuggle on June 23, 2018. 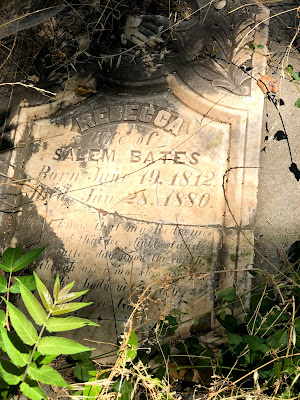 Above: the fallen headstone of Rebecca (Horton) Bates. The wife of Salem Bates. This photograph was taken by Jeremy Tuggle on June 23, 2018. 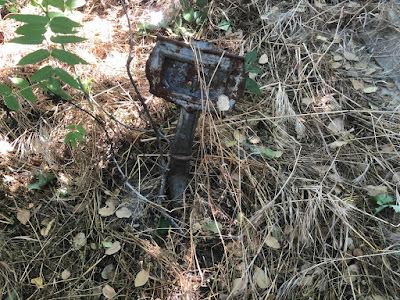 Above: a faded burial marker within the cemetery. This photograph was taken by Jeremy Tuggle on June 23, 2018. 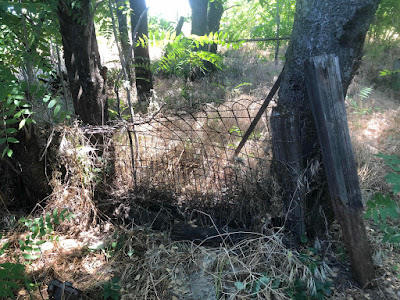 Above: an unknown burial that is fenced off inside the cemetery. This photograph was taken by Jeremy Tuggle on June 23, 2018.