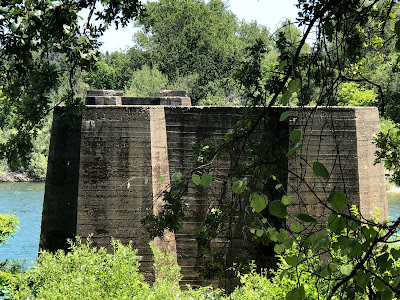 The Free Bridge piers from the top looking across where the bridged deck would be. This photograph was taken by Jeremy Tuggle on June 7, 2018.

During May of 1883, a group of local Redding citizens met to discuss the possibility of erecting a new non-toll bridge in the town of Redding to connect with the east side across the Sacramento River. They were tired of paying high prices to commute across the toll bridges and toll ferries in Redding. A proposition was made that a subscription of donations could be raised for the bridge's construction. However, the media responded to their proposition that it would cost ten or twelve thousand dollars and it was unlikely that this amount could be raised.
A bridge committee was organized to began promoting and collecting donations on behalf of the local citizens. Five months later, on August 10, 1883 an impressive $12,160 was raised by them for the bridge. Then on, September 8, 1883, the Republican Free Press newspaper announced that there were three construction companies who were interested in bidding on the contract of the new Free Bridge. Those companies were the following: the Pacific Bridge Company, the San Francisco Bridge Company, and the California Bridge Company. The company who submitted the lowest bid to the Board of Supervisors would receive the contract to do the bridge work.
It was the California Bridge Company who submitted the lowest bid at $13, 440, but the exact total of money donated by the public is not known, at that date. The actual cost of the bridge was not reported, even though the money was raised and it was paid for.
A man by the name of Robert Lee Reading was hired to design the bridge. Reading was the son of Major Pierson B. Reading, an early pioneer and the first European-American settler in Shasta County. The design of the bridge was called Pennsylvania Through Truss. The lead engineer on the project was a man by the name of O.H. Burrell who was employed by the California Bridge Company.
On September 29, 1883, the Republican Free Press newspaper of Redding reported the following:

“The contract for the free bridge across the Sacramento River at Redding has been signed by the Supervisors and the California Bridge Company, and work will be commenced next week. The bridge timbers will arrive in Redding tomorrow night or tomorrow. One hundred barrels of cement have arrived. D. Breslauer, who has the contract for hauling the material from the cars, has his wagons and teams readiness. Supervisor Robinson will act as Superintendent of construction. The bridge must be finished by the first of January, until completed our readers will be kept posted regarding its progress.” (SIC)

As construction began it took the rest of the year for it to be be completed. The Republican Free Press updated the public on the construction of the bridge on December 29, 1883:

“The bridge is completed, all that is now necessary is to make the fill at the end, which will take about four days, and will be started as soon as the weather will permit. This great enterprise, that created so much opposition and discussion, now be proved. People who have paid ferriage for years will have free access to the railroad, to Redding, and the County seat. This great boon is hardly appreciated at the present time, as compared with what will be after a few months of experience, and all, who voted for a free bridge, will be in short time the most popular men in Shasta county, and those even damned them, will be loud in their praise in the sweet by and by.” (SIC)

The Free Bridge was thrown open to the public in January of 1884. This would be the most direct route into the town of Enterprise and other locations point east. The bridge lasted twenty-two years with out any problems occurring and then during the winter of 1906 the Free Bridge was destroyed by the flooding of the Sacramento River.

The reconstruction of the bridge began in early August of 1907. Once again, it was the California Bridge Company who did the repair work with O.H. Burrell as the lead engineer. Burrell employed a crew of thirty men who were on a deadline to get the bridge completed by January 1, 1908 to restore the bridge to its former glory. A new decorative lightning system was installed on the bridge by the construction crew making it passable during night travel. Construction was steady and the necessary repairs were made but they still failed to meet the deadline due to the late arrival of bridge material. The steel material for the bridge cost them $18,000.
Thirty-four years later the bridge made headlines again as flooding damaged the bridge but the damage was quickly repaired. Then in 1948, a new bridge was constructed just north of the Free Bridge. This bridge was called the Cypress Avenue Bridge.
Traffic used both bridges until 1951 when the Free Bridge was closed to motor vehicles. During 1955 another flood made further damage to the bridge and it was ruled to be unsafe for pedestrians to cross. In 1956 the Free Bridge met its fate when it was authorized to be dismantled. Today, the only remains of the Free Bridge are the piers located on the east and west side of Sacramento River at the end of Smile Place. 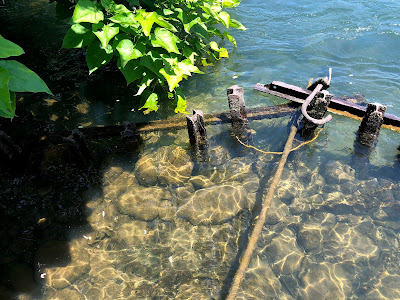 The structural foundation of the Free Brodge on the west side of the river. This photograph was taken by Jeremy Tuggle on June 7, 2018. 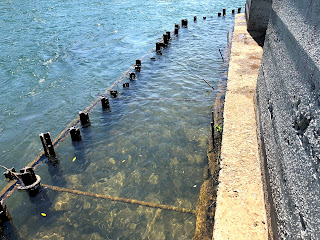 The structural foundation of the Free Bridge on the west side of the river. This photograph was taken by Jeremy Tuggle on June 7, 2018. 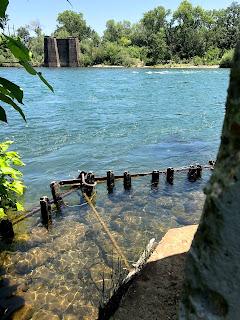 The Free Bridge piers looking east across the Sacramento River. This photograph was taken by Jeremy Tuggle on June 7, 2018. 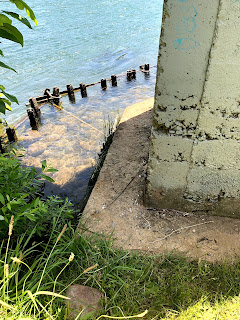 The foundation of the Free Bridge pier on the west side of the river. This photograph was taken by Jeremy Tuggle on June 7, 2018. 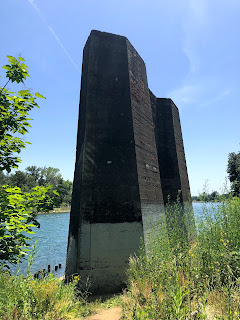 A solo picture of the Free Bridge on the west side of the river looking south-east. This photograph was taken by Jeremy Tuggle on June 7, 2018. 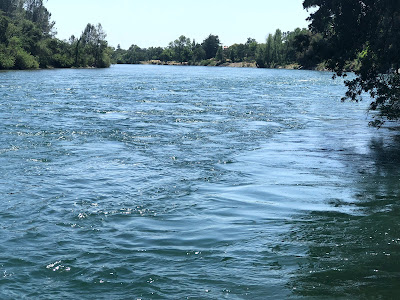 Looking south from the west side pier of the Free Bridge. The Sacramento River in Redding. This photograph was taken by Jeremy Tuggle on June 7, 2018.

Up And Down The River - The Sacramento Daily Union newspaper, May 25, 1883