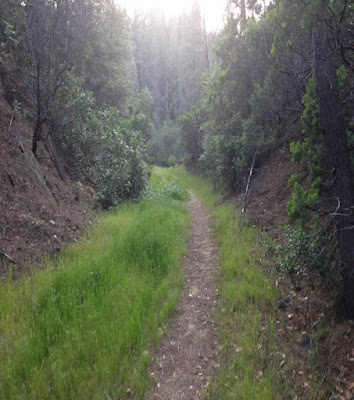 Pictured above is the (Old) Stage Road which was completed in April of 1851 taking travelers to and from Shasta. There is a historic marker nearby. This photograph was taken by Jeremy Tuggle on April 29, 2016.

Then in, April of 1851 the first stage road in Shasta County was completed giving travelers a lot smoother ride to and from Shasta. (A section of this old stage road still exists at the junction of Swasey Drive and Red Bluff Road near Shasta.) It brought many newcomers to the area and additional commercial trade. Many people used this road from the nearby rural communities to transact business in Shasta.

Three months later on July 10, 1851 a post office was established by the United States Postal Service headquarters in Washington D.C., with Robert W. Crenshaw appointed as the first postmaster. Then on, March 13, 1852, a newspaper called the Shasta Courier was founded in Shasta by Archibald Skillman, Jacob C. Hinckley and Samuel H. Dosh. This newspaper was a weekly newspaper which was printed every Saturday. During that year, a fire department was organized.

Shasta’s first fire occurred on the morning of November 28, 1852 at 3 a.m., the fire started in the Arcade Saloon and it totaled to $111,520. Eventually, Shasta was rebuilt. A second fire destroyed Shasta again on the night of June 14, 1853. The fire ignited at 5 p.m., inside the Parker House (a hotel) on Main Street, Shasta’s entire business district burned down in thirty-three minutes. The results were catastrophic, and the above fire was the greatest loss by fire to date in Shasta.

By October of that year, local residents were busy improving their city as new homes and businesses were rebuilt again. A school was organized in Shasta by a teacher named Benoni Whitten in 1853 with sixteen students in attendance. It was a public school and not a private school. In addition to that year, an entrepreneur by the name of B. Jacobson erected the first fire-proof brick building on the south side of Main Street. Jacobson’s store was called B. Jacobson & Company.

That year also witnessed the establishment of a Chinatown called Hong Kong in Shasta by the Chinese at the southern end of Main Street near Middle Creek Road. Each of the Chinese lived in their own huts made of wood and cloth. The majority of them were miners. Hong Kong was a thriving place that included several stores including a gambling saloon, a hotel, and a joss house. In December of 1853, Hong Kong had a population of 500 Chinese immigrants. The white settlers discriminated against the Chinese settlers, and anti-Chinese meetings were held within Shasta. They were unwelcomed in the area. The anti-Chinese meetings were held on a regular basis but in February of 1859, the Chinese were ordered by the white settlers to evacuate their Chinatown by March 1, 1859. Some moved on to other Chinese settlements in Shasta County and Hong Kong fell to vandalism.

In 1854 the first Shasta County Courthouse was built. The building was a two-story log style structure, which was located on High Street near Boell Alley. Shasta County paid $5,280 for this building and it served as the courthouse until 1861. In June of 1854, Doctor Benjamin B. Shurtleff erected a fire-proof brick building on Main Street for the purpose of operating his own pharmacy, this became the first pharmacy in Shasta and his pharmacy shared the building with the Goldstone & Company General Merchandise store.

In April of 1857, a new luxurious three-story fire-proof brick hotel called the Empire was completed at a cost of $30,000, on Main Street at Shasta. The first Empire hotel was destroyed by fire in 1853. The new building was paid in full by its owners Donalson & Company which also included a Mr. Chapman. They advertised as having the following: private rooms with large and commodious rooms which were provided for the accommodations of private families, a dining room, a bar with the best stocked liquors and cigars. In addition to the hotel there were also a corral and stable attached to the building.

The Empire hotel passed through many owners since Donalson & Company owned this first-class hostelry. The brand-new Empire hotel became the leading hotel at Shasta, and the Empire stayed in business under different owners until 1923, when a new owner of the hotel dismantled the hotel to relocate to Redding and built a newer hotel there. The Charter Oak hotel stayed in operation until 1915, when it was dismantled by its owners.

Then in 1861 the Shasta County Courthouse on High Street was converted into a modern schoolhouse. However, a building on Main Street was purchased by the county from James T. Loag for $25,000. The building was remodeled that year to include a courthouse and a jail. It stayed actively in use until May of 1888. (This building is presently the Shasta Courthouse Museum in Shasta.)

As Shasta prospered well into the 1870s with new businesses, and newcomers making Shasta their home, a new town called Redding was established at a place called Poverty Flats by the California and Oregon Railroad a division of the Central Pacific Railroad in 1872. With Redding coming into fruition, Shasta would soon start to decline due to the railroad bypassing Shasta, even though Shasta still had control of the county seat. As the end-of-the-line Redding was very fortuitous in its role in the development of our county for ten years until the railroad resumed construction and laid its tracks north of Redding through the Sacramento River Canyon.

Redding became incorporated as a city on October 4, 1887 and during the following year Redding battled Shasta and Millville at the local election primary to become the county seat. Redding won the county seat during that county wide vote. Shasta served as the county seat from March 6, 1851 to May 19, 1888, a total of thirty-seven years. On May 19, 1888 the first court was held in Redding inside the brand new Shasta County Courthouse on Court Street.

As Redding grew, Shasta’s population waned as local residents moved from Shasta to Redding, and at the turn of the 19th century, Shasta was becoming nothing more than a ghost town, falling to blight and vandalism. An effort to restore Shasta’s historic district began in the 1930s and from this effort came the creation of the Shasta State Historic Park which was dedicated in 1950. Today, (Old) Shasta remains a busy town with a population of 1,771 people.

A postcard of Callaghan Block at Shasta on Main Street, circa 1855. L-R: the Shasta Book Store, proprietor Anton Roman, City Drug Store, proprietor C. Roethe, and J. & D. Callaghan. This building was owned by the Callaghan siblings, Jeremiah Callaghan, Daniel Callaghan and a third brother whose name eludes me. This store was later owned by Jeremiah Callaghan & Company which included my maternal great-great-great-great-great grandfather, Walter William Scott (1807-1878), a forty-niner of Shasta County who formerly ran their pack trains and freighted in the merchandise from Sacramento to Shasta for the Callaghan brothers. He was also their store clerk. At later date, the name of the store became Scott & Callaghan. From the collection of Jeremy M. Tuggle. 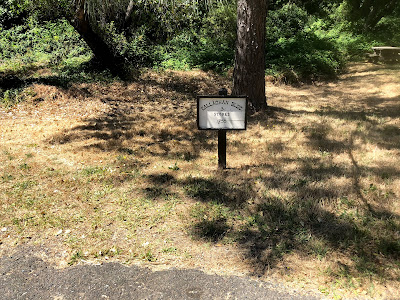 The present site of Callaghan Block on Main Street in Shasta A marker was placed by the Shasta State Historic Park marking the site. This photograph was taken by Jeremy Tuggle on June 23, 2018. 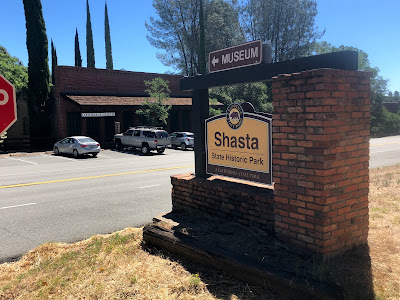 A view of Main Street, Shasta. Shasta State Historic Park and Museum at the former Shasta County Courthouse. This photograph was taken by Jeremy Tuggle on June 23, 2018. 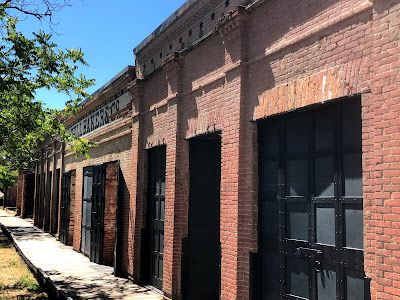 Bull, Baker & Company along Main Street at Shasta. This photograph was taken by Jeremy Tuggle on June 23, 2018. 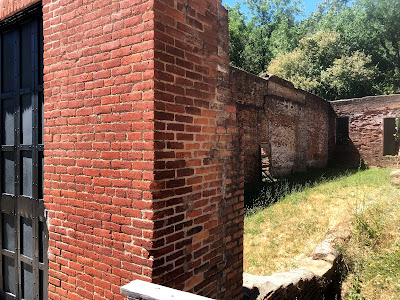 Additional ruins along Main Street at Shasta. This photograph was taken by Jeremy Tuggle on June 23, 2018. 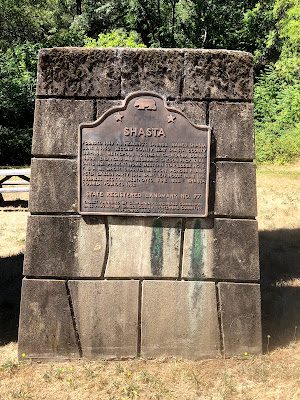 This plaque notes some of Shasta's history on it. Shasta is a registered California State Landamark. It was dedicated on June 12, 1950. This photograph was taken by Jeremy Tuggle on June 23, 2018.

A Jail And A Courthouse - The Shasta Courier newspaper pf Shasta, November 19, 1853

In the Shadow of the Mountain A Short History of Shasta County, California, by Edward Petersen ©1965