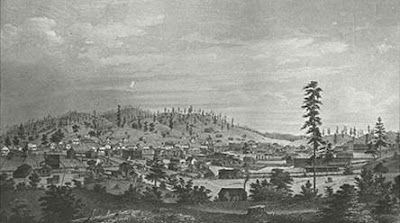 Shasta as it appeared in 1856. Courtesy of Shasta Historical Society.

The town of Shasta was established in 1848 as a sprawling tent community called Reading Springs which was surrounded by gold rush pandemonium as miners pitched up tents establishing the new settlement. A natural spring flowed near the community adding to its original name of Reading Springs. Reading Springs was named in honor of Major Pierson B. Reading (pronounced like the color red) the first European-American settler in Shasta County.

According to celebrated California historian, John S. Hittell, the first white woman was seen at Reading Springs in 1849. She was married and she had seven children of her own. Her name wasn’t remembered because it wasn’t recorded by the forty-niners. The population at Reading Springs increased between 500 and 600 residents in September of 1849.

The very first cabin was erected by Milton McGee the following month on High Street, after that other pioneers followed suit erecting additional bungalows on the hillsides near Main Street. The tents were taken down each time a new bungalow was completed. Then on, October 20, 1849, two cousins by the names of Harrison J. Shurtleff and Doctor Benjamin B. Shurtleff arrived together at Reading Springs from Boston, Massachusetts and they settled on a hillside near Main Street. Doctor Benjamin B. Shurtleff became the first surgeon and physician at Reading Springs. Eventually, he establishes the first pharmacy on Main Street and becomes one of the foremost leading citizens in the community.

On February 18, 1850 Shasta County was created as one of the original twenty-seven counties of the new State of California which was still transitioning from being controlled by the Mexican government to becoming a brand new state controlled by the American government. California wasn’t admitted into the Union as the thirty-first state until September 9, 1850. Shasta County is older than the State of California, and that is a true fact.

During the interim the name Reading Springs was changed to Shasta on June 8, 1850. It was named Shasta by Armstead C. Brown an early pioneer settler. Brown named the town Shasta because it was the nearest town to Mount Shasta. Siskiyou County wasn’t formed until 1852. As Shasta grew, the early settlers made it a ramshackle community but the town flourished.

One of the first merchants in town was a man by the name of R.J. Walsh who had a store on Main Street. There were many pioneer entrepreneurs establishing businesses in the new town site and they profited well, like Walsh did. One of the new businesses was the two-story St. Charles hotel which was built by John Mackley. The upstairs contained one large room with 250 cots, and no private rooms, while the downstairs portion of the building contained billiards with gambling tables.

A saloon was also included downstairs. In 1851 this hotel was owned and operated by Karl Augustas Grotefend. Even though the St. Charles hotel was the leading hotel in Shasta, Grotefend, was not concerned about the Globe hotel and the Trinity House (another hotel) being in operation at the same time.

A Jail And A Courthouse - The Shasta Courier newspaper, Saturday, November 19, 1853

In the Shadow of the Mountain A Short History of Shasta County, California, by Edward Petersen ©1965