ABANDONED, UNCOVERED AND THEN RE-INTERRED: A REDDING CEMETERY 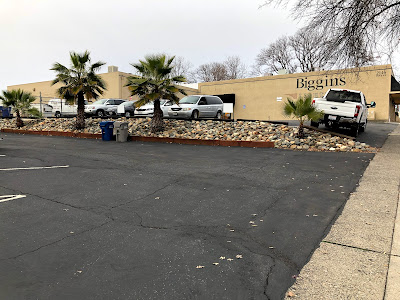 Believe it or not, this location at 2146 Pine Street in between Market and Pine Street in Redding was home to Redding's first cemetery. It's on the flatter surface of this knoll. This photograph was taken by Jeremy Tuggle on December 12, 2018.


Redding was established by the California & Oregon Railroad, a division of the Central Pacific Railroad, on June 15, 1872. Once the construction of the railroad resumed north from Anderson, the railroad company decided to bypass this burial ground, and make its way north to Poverty Flats where the construction stopped that year. This cemetery was now on the outskirts of the brand new town at the southern end.

The first streets in town which were laid out by the railroad company was North, South East and West Streets followed by the nearby counties Placer, Tehama, Butte, and Yuba Streets. While Redding grew larger with additional streets and the development of Pine and Market Streets it brought more commercial businesses and private residences to town. The town grew into a flourishing city and this cemetery became an oft-forgotten location. It's a site of historical importance because it was Redding's first cemetery which a lot of people tend to over-look in Redding's early history. Over the years, the cemetery has been called the Redding Abandoned Cemetery. Today, the site is the former home of Biggins Lighting who just recently relocated to Larkspur Lane in Redding.

Since the cemetery's establishment in 1867, this piece of land became the final resting place of some of our counties early pioneer settlers for nearly thirty-nine years when it became abandoned and then rediscovered in 1906. At Shasta Historical Society, there are volumes of interment records for Shasta County cemeteries and among these are the records for this cemetery. It was Samuel Dinsmore, a young man, who died on April 24, 1867, at Dinsmore's ranch due to consumption at the age of twenty-five and he became the first interment into this newly established cemetery. Samuel Dinsmore was the eldest of four children born to John W. Dinsmore and Arabella (MacGlashon) Woodrum-Dinsmore.

Together, the John W. Disnmore family arrived in Shasta County in 1852, and they settled at Shingletown. John W. Dinsmore was a millwright who is noted with erecting the Dry mill at Shingletown in 1853, with his partner Merriman Ferrel, a brother to his future son-in-law. Then in 1857, John W. Dinsmore purchased land from Major Pierson B. Reading, this land was part of the Rancho Buena Ventura land grant. According to Shasta County historian Madge R. Walsh, "Dinsmore located his home, the Four Mile House, about four and a half miles east of Shasta, on the west side of the stage road where it divided to go east to Green's Ferry, or south to Tehama via Canyon House. He had built his house before paying for the property, as it was already extant when the deed was recorded. Today, the site is about a quarter mile west of the junction of Highway 299 W and Ridge Drive." 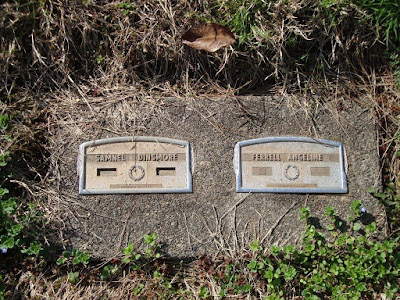 The headstone of Samuel Dinsmore whose remains were re-interred into the Redding Cemetery (now Redding Memorial Park). His name is misspelled as Samnel. He is buried next to his sister Angeline (Dinsmore) Ferrel (whose surname is misspelled as Ferrell. Ferrel is the correct spelling. There are no dates on this headstone. This photograph was taken by Jeremy Tuggle August 28, 2014.


Later that year, Arabella Ferrel, a niece of Samuel Dinsmore, and a daughter of Henry Clay Ferrel and Angelina (Dinsmore) Ferrel died at Balls Ferry, at the age of eleven from congestive chills on July 27, 1867. Henry Clay Ferrel is my paternal great-great-great uncle, and his daughter became the second interment at this former cemetery. Henry C. Ferrel, was a native of Ohio, and he arrived in Shasta County in 1853. He was married in 1854 to Angelina Dinsmore. In 1860, they were living at Shasta, Henry C. Ferrel was a miner by trade. 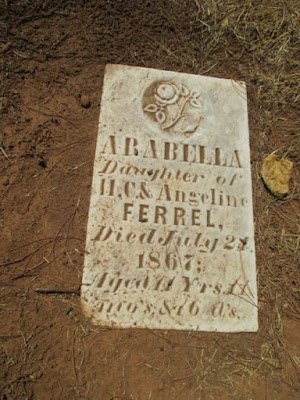 This is the headstone of Arabella Ferrel, a daughter of Henry Clay Ferrel and Angelina (Dinsmore) Ferrel who was re-interred at the Redding Cemetery (now Redding Memorial Park). The Ferrel surname is spelled correctly here. THIS IS NOT THE FIRST BURIAL IN REDDING MEMORIAL PARK.  Note: Redding Memorial Park was established in the 1890s. This photograph was taken by Jeremy Tuggle on August 28, 2014 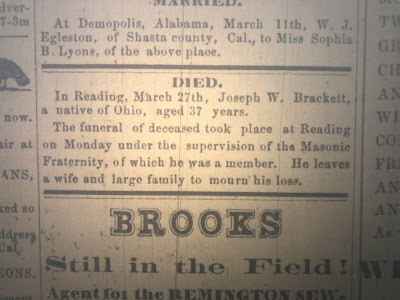 The death notice of Joseph W. Brackett who died March 27, 1875 at Redding, he was a local lawyer. He was a son of Joseph Warren Brackett and Lydia (Miller) Brackett. His funeral was conducted under the supervision of the Masonic fraternity, of which he was a member. He was survived by his wife and a large family to mourn his loss. Taken from the Shasta Courier newspaper, Saturday, April 3, 1875.

The following is a confirmed listing of burials which took place between the years 1875 and 1877 and all of them were re-interred into the Redding Cemetery (now Redding Memorial Park);

Six years after the turn of the 20th Century on February 13, 1906, the Redding Water Company rediscovered parts of the original cemetery when they were lowering the manes in that section of Redding. The majority of these burials above were re-interred into the Redding Cemetery (now Redding Memorial Park), that year. It was heralded across the state as a gruesome discovery, as their employees were finding the original coffins which were still intact and the headstones.

The local media claimed there were seven burials which had been unearthed, and only six of those seven burials are named in the cemetery records at the historical society. So who was the seventh burial? More research may uncover the answer to that question while it remains a mystery.

It’s possible that there might be additional burials at the former site of the Redding Abandoned Cemetery, only ground penetrating radar could tell us if there are any anomaly’s underground that shouldn’t be there today. It’s not clear if they recovered all of the burials because some references give this cemetery a much larger perimeter. It’s definitely, a location of historical interest that doesn’t get a lot of exploration, the next time you drive-by this former cemetery take a look as you're passing 2146 Pine Street. 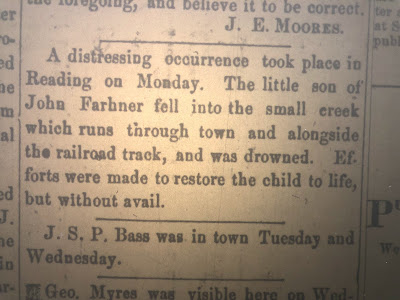 The death notice of Emory Farhner, son of John Farhner, who died due to drowning in a small creek which ran through Redding and near the railroad tracks. Taken from the Shasta Courier newspaper on Saturday, March 25, 1876. 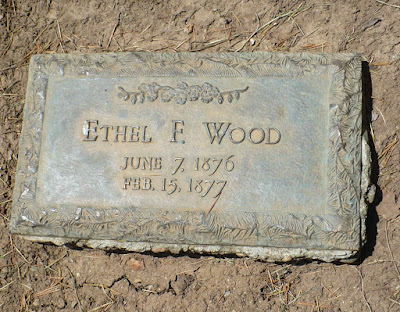 The headstone of Ethel Florence Wood a daughter of William A. Wood and Mattie Wood. This photograph was taken by Jeremy Tuggle on August 28, 2014.

Finds Coffins And Headstones In The Streets Of Redding - The San Francisco Call newspaper of San Francisco, February 14, 1906