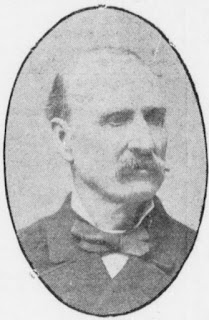 Cone & Kimball soon discovered their land to be extremely valuable to new settlers who wanted to purchase the land for farming purposes. After many offers, the land was sold to a number of newcomers during the latter part of the 1870s. The first residence was located on the south side of Gas Point Road about one mile west of Dry Creek. At this location a water well from that first family still existed when local historian, Myrtle McNamar, published her book Way Back When in 1952.

Three or four families with young children settled, early on, at Kimball Plains which helped the residents establish the Kimball School District on August 5, 1879. Eventually, a one-room schoolhouse was erected in the area. It’s first teacher was A.R. Eldridge. Later, a Baptist congregation was formed in the area and they met inside the Kimball schoolhouse on Sunday morning's. This church was led by my paternal great-great-great grandfather, the Reverend William S. Kidder, a resident of Eagle Creek (now Ono).
Kimball Plains lacked a post office to send and receive mail. The nearest post office to this settlement was located at Gas Point. The mail was delivered from there by their postmaster to the local residents of this community. Then in 1882, Major Gorham G. Kimball and a man named J.C. Tyler sold 640 acres of land to woman named Mary Wright who bought the land for grazing purposes. The following year, A.R. Eldridge was still the teacher of this community who enrolled thirty-seven students at that time into his class.

In April of 1885, the agricultural scene at Kimball Plains changed a little when the discovery of a quartz ledge was made at Kimball's stock range, and the Shasta Courier newspaper of Shasta, reprinted the following article from the Red Bluff Sentinel newspaper of Red Bluff:

"New Discovery - Major Kimball and Will Lunning returned last evening from the Bald Hills country, where they have been for several days surveying the outside lines of the Major's  stock ranch, preparatory to fencing the entire tract. While surveying they ran across a quartz ledge, and knocked off some rock, which they brought with them to be examined by experts and possibly sent to San Francisco  to be assayed. For outside, surface rock, it looks very good, and in fact, native silver can be detected with the naked eye. The rock looks like croppings that come from the Bully Choop mines. The Major further states that frost cooked the leaves on oak trees, and great damage was done to fruits of all kinds. - Red Bluff Sentinel."

Kimball Plains wasn't known as a mining community, but mainly it was settled for agricultural purposes, and when the assessments of the ore returned the ore wasn't as lucrative as Kimball & Lunning hoped for. The mining excitement ceased and it did not create a new boom to the area. During the 1890s, Franz Venzke, a native of Germany, settled at Kimball Plains as a farmer with his wife Sally (Alberg) Venzke.

Then in September of 1894, the Kimball Plains Schoolhouse caught fire and burned down. After the fire, the students were transferred to the Cottonwood school to advance their education. In February of 1901, this excerpt of an article from the Red Bluff Daily News newspaper of Red Bluff reported the following news:
"Within the past few days parties representing two large oil companies from the East, one from Massachusetts the other of Pennsylvania have been trying to secure the sheep range of Major G.G. Kimball, located about thirty miles north-west of this place in what is known as the Bald Hills of Shasta County, and comprising of something like 5500 to 6000 acres for the purpose of boring oil. Their proposition to him, as it was learned, was to sink wells on the place at their own expense and offering him large inducements for the privilege, believing from their experts' opinions that a gusher will be unearthed on these lands."
Just like the earlier mining excitement, this discovery ceased action as well. The Bald Hills didn't produce a lucrative oil strike as it was originally opined by the experts. Major Gorham G. Kimball held onto his land, and there was no new boom to the area of Kimball Plains. During that same year, local resident Franz Venzke was remarried to Mary Rockhold. Then in 1912, Venzke's eldest daughter was married at the home of the bride's father at Kimball Plains to William B. Moore. Beside's being a farmer, Franz Venzke, was also a land owner who kept buying numerous pieces of land in the area.

The Kimball School District was re-established on November 14, 1916, after a new schoolhouse was erected for their community that year. This school was located on the north side of Gas Point Road just east of Dry Creek and it was their second and last schoolhouse. In 1920, Mrs. Gertrude Carter was the teacher of the Kimball schoolhouse.

By February of 1920, Franz Venzke had purchased an additional eight hundred acres of land near Gas Point which gave him a total of 2,000 acres in that section of the county. There is also a story which was heralded by the Blue Lake Advocate newspaper of Blue Lake, California about the Kimball school and it describes the following account:

"Borrowed Children Keep Shasta School Alive - Redding (Shasta Co.) Jan. 26., Kimball Plains School District, four miles west of Cottonwood has a $1,500 school house but no children of school age within its boarders. Mrs. Alice Stone, teacher, keeps up the school and saves the district by "borrowing" school children from neighboring districts and taking them to school every day in her automobile. There is a fresh crop of children now under school age, coming up in Kimball Plains district and there will be no trouble another year to maintain the school with the district product." (SIC)

Franz Venzke lived in the area until his death in November of 1946. He is buried in the Cottonwood Cemetery. Two years later, the Kimball schoolhouse closed down due to poor attendance. Today, not much is left of this early settlement. However, Kimball Plains Road just off Gas Point Road retains the name of this former community. 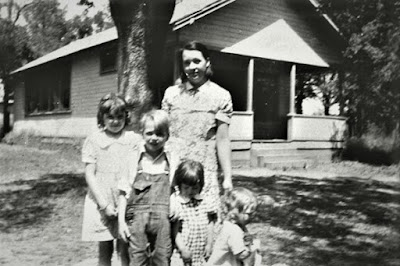 The Kimball schoolhouse at Kimball Plains. Teacher: Inez (Moore) Ruddy with her students, circa 1945. Courtesy of Shasta Historical Society.

Our Schools - The Shasta Courier newspaper of Shasta, March 3, 1883

History of the State of California and Biographical Record of the Sacramento Valley, California. An Historical Story of the State's Marvelous from its earliest settlement to the Present Time. By Prof. J.M. Guinn, A.M. The Chapman Publishing Company, Chicago, Ill. © 1906