Nathan A. Townsend: The Man Behind the Historic Townsend Flat Ditch 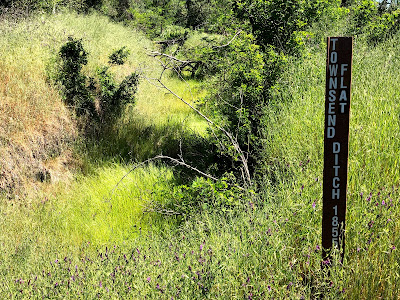 Above: the Townsend Flat Ditch on the left along with its marker on the right. This photograph was taken by Jeremy Tuggle on April 28, 2020.
Nathan A. Townsend was a native of New York who was born about 1824. Townsend arrived and settled at Middletown in Shasta County in 1853. Soon after, Townsend was elected as a member to the Shasta County Democratic Convention at Shasta in June of that year. He always supported the Democrat party in politics and while voting at the polls during election years. He mined on a flat near Horsetown which was named Townsend Flat in his honor.
Townsend was the owner of the Union Hotel at Middletown in 1854. He was married to his wife May, a native of Illinois, as well. They operated the hostelry together, and aside from the hostelry business, Townsend was also a miner.

This advertisement states, "Middeltown Ball. A ball will be given at the "Union Hotel", Middletown, on the evening of Tuesday, the 17th October. Every necessary arrangement will be made to make it go off agreeably. - N.A. Townsend". From the Shasta Courier newspaper edition of September 30, 1854.
Townsend claimed ownership to a number of mining claims a half mile below the town of Briggsville in the Clear Creek area.  In 1855, at this location, he built a dam and then he began the construction of a water ditch. This ditch originated on the north side of present day Saeltzer Dam at Clear Creek which is (unrelated to the Townsend dam). Clear Creek Road is not far from this ditch. The ditch stretched for a total of 6.4 miles long and empties into Olney Creek, it was completed that year. It brought him water to his mining claims which was used for the extraction of the gold he sought after.
That same year, the mining settlement of Nebraska situated along the Clear Creek area was coming to fruition with new settlers who were attracted to the local gold mining claims in the area. Nathan Townsend and his wife were among the first settlers of this community which never had a post office to send and receive mail.
Apparently, Townsend went into partnership with a man named C.M. McKinney, and in May of 1858, they sued John D. Smith for damages to their ditch, dam and mining claims. Its unknown how extensive the damages to their property were. The case of McKinney & Townsend Vs. John D. Smith began that October and by November 6, 1858, the Shasta Courier newspaper published the following:
"Interesting and Costly Suit - The case of McKinney & Townsend vs. J.D. Smith et al., that has occupied the District Court for about a month, elicited a greater amount of interest than any civil suit ever heretofore tried in our courts. It was rather an expensive affair. The jury fees alone amounted to upwards of $800, while the Clerk's fees amounted to perhaps a greater sum - to say anything of the fees and the sheriff and the lawyers." (SIC)
In December, the case of McKinney & Townsend vs. J.D. Smith was granted a new trial by the presiding judge the Honorable, William P. Daingerfield on motion of the defendants. It was then thought that the case would be tried by the Supreme Court, but eventually it was settled out of court. Additional disputes involving Nathan A. Townsend would soon emerge in the Shasta County Courts over his properties.
Later on, the 1860 U.S. Census records Nathan and Mary living in the county seat of Shasta. Nathan is recorded as "N.A." Townsend. There are no children mentioned on this record living in their residence. Nathan, also recorded $500 in real estate value on this record.  However, a son by the name of Wilbur was born to this union. It's possible there were other children.
The 1860 U.S. Census also records Nathan’s son Wilbur Townsend as “W.A.” Townsend who is living at Horsetown in the household of M. Patterson. Wilbur was working as a cook presumably at the Union Hotel in Middletown. Like his father, he was also a native of New York, and he was married to his wife Martha. Together they had two children, Lewis and Ada. Nathan's son Wilbur Townsend became the owner of the Union Hotel in 1861.
In 1862, Nathan A. Townsend and his wife, Mary, were residing at Muletown, and in August of that year, he became a Justice of the Peace for that community. Townsend's partner C.M. McKinney was also the target of a lawsuit in the Shasta County District Court by Enos B. Taylor which during the above trial on the 16th of October 1862, on a judgement rendered at the June term of the said court in favor of Taylor for the sum of $5,499.17, with legal interests with the costs taxed in the sum of $143.45, in favor of Taylor. It was Shasta County Sheriff John S. Follansbee who was ordered by the court to sell the following described property at a future date, "The equal undivided one-half of the dam and ditch situate in the county of Shasta aforesaid, known as Townsend's dam and ditch, and which said dam and ditch were constructed for the purpose of taking the waters of Clear Creek from a point below Briggsville, and conveying the same on to mining and agricultural lands below said point. Also, one equal undivided one-half of all the farming claims and mining claims owned and possessed by the said N.A. Townsend, contiguous or in vicinity of said ditch; together with one equal undivided one-half of all the buildings on said premises, and the tools, sluice boxes, and all appurtenances thereunto below." (SIC)
Finally, on November 7, 1862, the above property was sold at auction to the highest bidder in Shasta. Unfortunately, the name of the buyer wasn't released by the local media. After 1863, not much is known about Nathan A. Townsend as he becomes untraceable in the United States Census records and information about him is unknown after this date. Nathan's son Wilbur Townsend relocated from Shasta County to the Nevada Township, in Nevada where his family was living in 1870.
Years later, the Townsend Flat Water Ditch Company took over Nathan A. Townsend's earlier holdings along Clear Creek and his water ditch after this company was incorporated on December 3, 1890. The Townsend Flat Water Ditch Company dissolved in the early 2000's and most of the property was split up into private ownership under different people and parts of the ditch became the property of the McConnell Foundation. Today, this one hundred sixty-five year old water ditch still remains visible to the passing eye with trail markers marking its path along the Clear Creek Gorge Overlook and Trail, a pet-friendly, 3.5 mile long trail which ranges from easy to moderate along its path. Take plenty of water with you and the appropriate shoes, if you go. 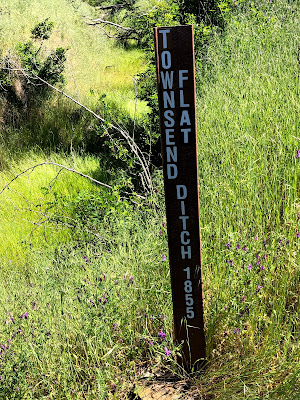