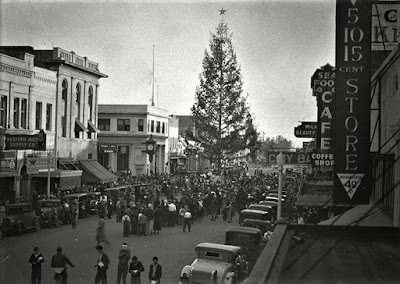 A crowd gathers to attend the lighting of the Redding Christmas tree in 1933. The tree is topped with a neon star. Courtesy of Shasta Historical Society.

This holiday favorite was originated in 1919 by the Pacific Gas & Electric Company (PG&E), who cut the first evergreen to be placed on display in the city from McComber Lake in Shasta County. The tree was then transported by truck to the intersection of Market and Yuba Streets in downtown Redding for its placing. The tree could be of any size if they were fully branched without missing spaces. The Christmas tree would often stay standing until after the New Year had arrive, then it was dismantled.

Each year, the tree was crowned with a beautiful neon star on the top of the tree. Then in December of 1929, the Redding Christmas tree was measured at 73 feet high, and it was donated to the PG&E by two residents from La Moine. The date of December 20th, 1929 was selected for the big party at the intersection of Market and Yuba Streets.

To help the Pacific Gas & Electric Company, a general committee was organized about 1930 which was comprised of Mayor William Menzel, Chairman; Ben Mason, and K.A. Walker. This committee would organize the upcoming Christmas tree festivities and other Christmas events. New delegates would be chosen to this committee in the future as well. In 1930, twenty-five hundred boxes were ordered to place gifts inside them for the children of Shasta and Trinity Counties in Redding, and gifts were purchased to be placed inside these boxes.

Officials selected November 28th, 1930 for the beginning of the holiday season, in which Redding stores celebrated by decorating their window displays and buildings for Christmas. Also, some stores reduced their prices as well. Stores along Market Street stayed opened later to attract as many customers as they could. Hundreds of people gathered to be present for the highlights that evening while Redding lacked a Christmas tree. It was S.G. Nelson of the McCormick-Saeltzer Company who donated the Christmas tree which he planned on cutting down with the help of W.D. Simons, Earl Lee Kelley, K.A. Walker, Dr. H.C. Erno, Ben Mason, James Holt, Mayor William Menzel, Augustas H. Gronwoldt and Lyle Sarvis. The tree was transported to Redding from La Moine by the Pacific Gas & Electric Company in one of their trucks. Later, the Christmas tree was dedicated on December 15, 1930.

Each year, new ideas were presented, and the dates were pushed back earlier, or moved forward later for the lighting of the Redding Christmas tree and other festivities to be included during this joyful event. The intersection of Market and Yuba Streets was used up until 1970 (a total of fifty-one years) according to several Shasta Historical Society members who remembered it well. The Christmas tree was relocated around that time period to the parking structure on California Street (which is now being demolished). The construction of the downtown Redding Mall is the reason why the Christmas tree was relocated there. The downtown Redding Mall was opened by August of 1972.

After forty-nine years, the Christmas tree will be back in its original location at Market and Yuba Streets on December 6, 2019 which will be dedicated that night at Winter Fest. Older residents still recall and cherish their memories of having the Christmas tree at that location. This time, a whole new generation will be able to create memories with their families and loved ones at the original site. This year also marks the one hundredth anniversary of this Christmas tradition. 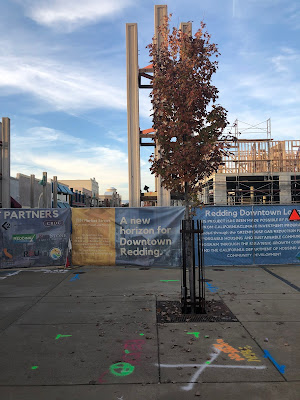 The green paint on the ground represents where the Christmas tree will be dedicated at Market and Yuba Streets on December 6, 2019 during Winter Fest. This photograph was taken by Jeremy Tuggle on November 7, 2019.

Redding To Have Giant Christmas Tree For All Children Of The County - The Courier-Free Press newspaper of Redding, December 11, 1925

Party Organized To Get Christmas Tree For Christmass Fete - The Courier-Free Press newspaper of Redding, December 9, 1930

Christmas Tree Put Up On Monday - The Courier-Free Press newspaper of Redding, December 15, 1930