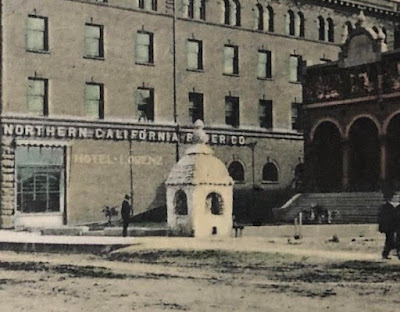 Above: this postcard image was taken between the years: 1904 and 1915, it shows a person looking at the quartz water fountain which was on the corner of the Carnegie Library building at 1527 Yuba Street. The Lorenz hotel is near it. From the collection of Jeremy Tuggle.

In 1904, a local pioneer woman named Emma (Gregory) Groves began raising subscriptions to have a quartz water fountain erected at the most prominent area in Redding, which she felt was at the corner of the Carnegie Library building on Yuba Street. Emma was a director of the Carnegie Library board, and a charter member of the Women’s Improvement Club of Redding. She was also the wife of George Groves, a Redding hostelry man.

By November 11, 1904, only $678 of $700 was paid by Mrs. Groves, which was enough to begin the construction of the water fountain that month. Mrs. Groves supervised the entire construction process of the fountain, yet the contractors were not named by the media. However, the construction stopped due to a lack of funds.

Then on, December 3, 1904 a meeting was held at Jacobson’s Hall by Mrs. Groves for the purpose of raising $22.00. The fountain which Mrs. Groves purchased cost her $700, and after a delightful program with music rendered by a local pianist, the final amount was raised that day. The water fountain which was entirely made of Shasta County quartz was completed that December. 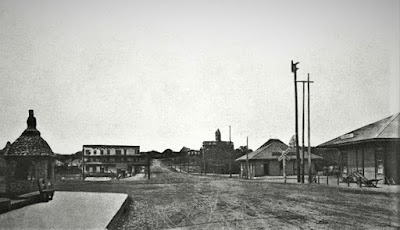 Above: In Redding on Yuba Street looking west with the quartz water fountain on the south side of Yuba Street. The Western hotel appears in the distance along with the Shasta County Courthouse. This photograph was taken between 1904-1915. Courtesy of Shasta Historical Society.

About 1906, the water fountain cracked at the crest and it had to be repaired. Mrs. Groves met with several architects and contractors to discuss how to repair the fountain. Several suggestions were made; however, the best method they picked was to hoop the fountain together with bands of steel near the top of it. Mrs. Groves asked Redding architect Mathew W. Herron to supervise its repair work.

After the repairs were made to the water fountain, it continued to be used by the public, yet it dried out, and the cool sparkling water couldn’t disperse from it as many people tried to drink from this fountain. A local media outlet described it as an “eyesore because it was an useless appendage - a sort of appendix to the Carnegie Library and it’s grounds made beautiful by the Women’s Improvement Club.” (SIC) 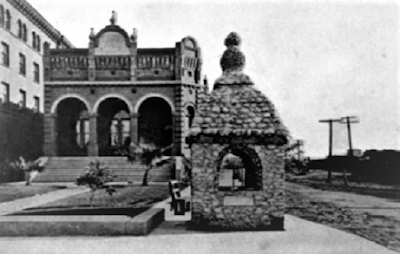 Above: left to right, the Lorenz hotel, the Carnegie Library building and the quartz water fountain looking south from Yuba Street. This photograph was taken between 1904 and 1915. Courtesy of Shasta Historical Society.

In 1909, George Groves died in Redding and his widow remarried years later to David N. Honn, on March 18, 1915 in San Francisco. That year, the Women’s Improvement Club obtained permission from the City Trustees to demolish the water fountain. Demolition began on April 2, 1915 when demolition crews with jackhammers and wedges began its demise. Surprisingly, it cost the Women’s Improvement Club $100 to destroy the useless fixture. 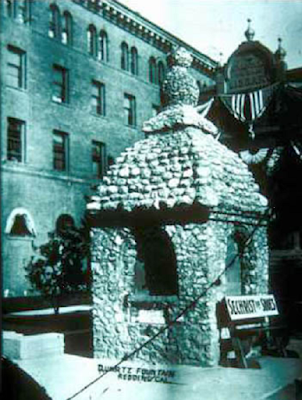 Above: the quartz water fountain on Yuba Street in Redding with a bench near it. The advertising on the bench says "Sechrist Shoes". This photograph was taken between 1904 and 1915. There is some shadow play in the foreground. Courtesy of Shasta Historical Society.

What The Women’s Improvement Club Has Done For Redding - The Free Press newspaper of Redding, January 23, 1904

Pioneer Woman Of Redding Passes On In Seattle - The Searchlight newspaper of Redding, April 5, 1925