The Pacific Telephone and Telegraph Company Building; and the History of the Telephone in Redding 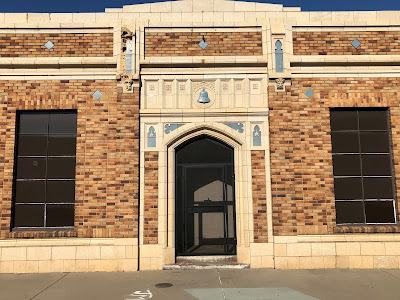 Above: 1629 Market Street in Redding, the Pacific Telephone and Telegraph Company building. This photograph taken by Jeremy Tuggle on August 3, 2019.


The building at 1629 Market Street in Redding was the official headquarters of the Pacific Telephone and Telegraph Company, which is still in use to this day, according to Redding Electric Utility. This building is located in between Yuba and Placer Streets on the east side of Market Street. This building often attracts the attention of the public regarding its history and use. I’ve received quite a number of inquiries about it over the years and have retold its history each time.

The building itself is a commercial building and has an intriguing architectural design, called Tudor Gothic. The architect of this building was J.P. Brennan who erected the building at a cost of $60,000. The first process towards the erection of this building occurred on March 13, 1926 when a topographical and delineative survey was conducted on the one-hundred-foot lot for the purpose of furnishing information to the architect to design the plans for the building.

Then on April 30, 1926 it was announced by George Wahl, manager, of the Redding Pacific Telephone and Telegraph Company, that the plans were completed. Wahl also mentioned to the local media that the actual start of construction would begin in May of that year. It was also reported that their new building was going to be a first-class semi-fireproof one-story structure with a basement.

During May of 1926 the initial construction took place and continued for the next eight months. Then on, January 12, 1927 the building was dedicated, and it opened for business the same day. The Pacific Telephone and Telegraph Company was the second telephonic service company in Redding which dates to 1898 when their original location was inside the Swasey building on Yuba Street between Market and California Streets. In 1907, the company relocated into a building at 504 California Street. After spending twenty years in their California Street location their new building on Market Street was ready for them to move in, and on January 12, 1927 it also marked forty-seven years of telephone progress in the City of Redding. 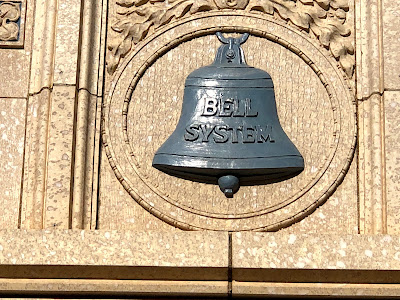 Above: the Bell System logo on the front entrance to the building of 1629 Market Street in Redding. This photograph was taken by Jeremy Tuggle on August 3, 2019. 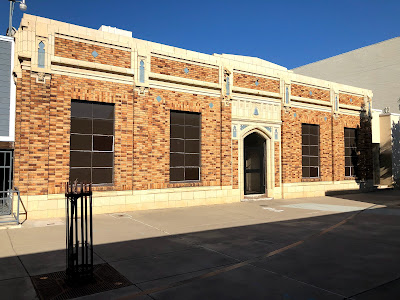 Above: the full length front of the building at 1629 Market Street in Redding. A view of the business office in the north-east corner of the building. Customers were able to place local and long distance calls here. This photograph taken by Jeremy Tuggle on August 3, 2019.

THE HISTORY OF THE TELEPHONE IN REDDING:

A man named Charles E. Berry, a local tinner, installed the first telephone at Redding in 1880. According the 1880 U.S. Census he resided at 216 East Street with his wife Aarilla and their three children. A crude telephonic instrument was invented by Berry who strung a copper telephone line from his house on East Street to his tinnery shop on Yuba Street.

Now Berry was able to communicate with his family from work each day. By June of 1881, several of these crude telephones were modeled after Berry’s design, which was never patented, but his design was used around Redding. Among the people and businesses who had them were the following: Doctor O.J. Lawry, a physician and surgeon, who installed a telephone line at his residence to connect with the Gleaves and Averill drug store owned by Redding druggist James M. Gleaves, and Redding dentist, George W. Averill.

Harry Parker who was employed as an operator for the Postal Telegraph Company, also installed a telephone line from the Redding railroad depot to the Gleaves and Averill drug store. Telephonic communications in Redding were booming, and everyone wanted to ride the wave.

By 1884, Berry’s design was improved by Redding resident E. Newton Eaton, a brother to Redding druggist James P. Eaton, who according to the local media “constructed a single wire line using iron wire between the store of Gilbert, Miller and Eaton and the residences of S.J.R Gilbert, Dr. Miller and James P. Eaton. The instruments were made of tin, with an opening in front which was the transmitter and receiver across back of the box, which had been left open. A piece of rawhide was stretched to form the diaphragm and the end of the wire was run thru the diaphragm in the center and fastened inside the box. Later, the rawhide was replaced by a piece of drumhead which Eaton secured for the purpose and which improved the instrument. No batteries were used. The sound being carried purely by the vibrations from the diaphragm. A code of taps for signals was arranged and this served the purpose of the phone bell.” (SIC) E. Newton Eaton had stated that the transmission of the voice was fine, it was clear, and it carried down the line.

However, sometimes an electric shock was generated between the users of this crude device. Five years later, E.W. “Pike” Roney constructed a grounded telephone circuit for the Enright Lumber Company at Bella Vista which was installed between that town and their yard in Redding. This was a line used by company officials only. The installation process that Roney used to create this telephonic line was: “black iron balling wire, salamoniac batteries and Bell company instruments secured from the Bell Telephone Company. Another instrument was connected to this line and located in the apartment of Vuave, assistant superintendent for Enright”. (SIC)

Preceding the Pacific Telephone and Telegraph Company in Redding was the Sunset Telephone and Telegraph Company which had their initial start in 1894. This company began using what’s known as the village or automatic system which proved inefficient. Telephone customers who used this system had to handle the switching by themselves in Redding. There were no official switchboard operators then. Later, a switchboard was installed in Eaton’s Drug store which was then located in the Bergh building on California Street and owned by James P. Eaton. The first official switchboard operator who handled the above switchboard was Redding resident Arvilla (Thompson) Paulsen, a daughter of Philip C. Thompson and Ida (Kelley) Thompson.

In 1897, there was 87 telephones in operation and connected to this switchboard. As the “hello” boom flourished in Redding the Sunset Telephone Company promoted their telephone services even more and brought the tally to 100 telephones in operation by the end of that year. In May of 1898, telephonic communications were enhanced when the San Francisco to Redding line was connected by long distance. Later, the Redding to Portland line began serving the public. A year later the City of Redding had 135 telephones in operation. Rapid growth of telephonic systems in Redding has changed drastically over the years far exceeding the initial design by Alexander Graham Bell in 1876, when he received a patent for it that year.

First Work Is Done Towards Erection Of Telephone Building - The Courier-Free Press newspaper of Redding, March 13, 1926

$60,000 Pacific Telephone, Telegraph Building To Be Erected In Redding - The Courier-Free Press newspaper of Redding, April 30, 1926

Contract For Construction Of Telephone Building Let - The Courier-Free newspaper of Redding, May 24, 1926

History of Telephones in Shasta County by Peggy Kesterson. On file at the Shasta Historical Society in VF 621.0 Utilities, 1973-1974.