On June 12, 1891, the San Francisco Call newspaper published the following column about the future Temple Hotel and Masonic Lodge of Redding:
“Another Masonic Temple
The Redding Lodge Branching Out In Grand Style.
The Masonic Building Association of Redding has so far completed arrangements as to order the signing of the contract for the erection of the Masonic Temple in that place. It will be a four-story edifice, the two lower stories for rent, and third floor for Masonic uses, with lodge-rooms ample for all higher degrees, Knights Templars, etc., banquet-rooms and library rooms. It will be the finest building of its kind north of San Francisco. The Masons of Redding are hopeful that the building will be completed by September or October, before the Grand Lodge meeting. The Grand Lodge will be asked in due time to lay the cornerstone, with the Masonic fraternity and military assist. The Redding Lodge intends that it shall be the pride of the fraternity and the event of all Masonic events in the northern portion of the State.”
The Temple Hotel’s cornerstone was laid on August 6, 1891, by the Redding Lodge of Masons for the Masonic Building Association, on the southeast corner of Tehama and Market Streets. In 1894 the construction on the Temple Hotel was completed and the Masonic Building Association opened their new hotel and lodge. It was a gothic style four-story building with a basement and it featured the Masonic symbol at the top of the building. The hotel included one hundred rooms for its guests and one bathroom in the entire building, however, porcelain potties were provided under each bed for their use. The third and fourth floors of the building were reserved for Masonic members. The Masons utilized the majority of the hotel. At one point, the Masonic Building Association began transporting travelers from the Temple Hotel to the Redding Depot on Yuba Street with their own wagon and it remained a custom of the hotel for many years.
The Masonic Building Association employed Henry Clineschmidt to conduct the everyday business of the hotel and Masonic Lodge. His wife Nancy (Ritchie) Clineschmidt assisted her husband when he needed her help, and of course additional employees were hired. The Clineschmidt’s were permanent residents of the hotel. 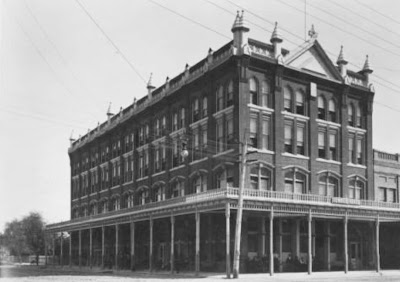 Above: the Temple Hotel of Redding, date unknown. Courtesy of Shasta Historical Society.
The hotel included a barroom which was stocked with the finest liquor and cigars. The Masonic Building Association hired F.A. Nauman to tend their bar. Nauman was still employed by them in 1898. By the following year the Temple Hotel was advertised as a first class establishment with first class table service and airy and pleasant rooms. The hotel room rates were one dollar per day and upwards while meals were offered at twenty-five cents a plate.
After the turn of the century, the Temple Hotel included the Temple Barbershop owned and operated by W.J. Scott, which was located on the main floor. It was still in business by 1904; however, it was a short-lived business venture. The barroom inside the hotel always kept busy. Two years later, on January 2, 1906, the Temple Hotel and Masonic Lodge were sold by the Masonic Building Association to Henry and Nancy (Ritchie) Clineschmidt for a total of $24, 000. Now the Clineschmidt’s not only operated the hotel - they owned it.
Over the years the hotel hired a number of employees to work as bell hops for both day and night shifts and night clerks for the hotel. In 1907, a popular night clerk at the Temple Hotel, Harry Grant, disappeared after robbing the cash register of $40. The story made headlines, but Clineschmidt chose to not press charges against the young man. Henry Clineschmidt and his wife continued to operate the hotel until her death May 13, 1918, and his death February 1, 1919. At this time his son Henry Clineschmidt Jr., along with his wife Luella, became the owners.
By 1931 the Temple Hotel had a registered address at 1401 Market Street. During the 1930s, the Clineschmidt’s brought in new businesses to the main floor of the hotel. These included the Temple Barbershop, whose proprietors were Elliott & Height, and the Temple Hotel Beauty Shop, which was owned and operated by Ell Feuz Eliz Carney, and the barroom became the Temple Lounge, which was owned and operated by A.V. Pearson.
In 1940 the Temple Lounge changed hands and Charles Bragg became the new proprietor. In 1948 the Temple Hotel was one of four major hotels in the area; Redding also had six smaller hotels in operation at that time. By 1951 owning and operating the hotel became an extended family affair with Henry Jr.’s brother Robert L. Clineschmidt stepping in to help his brother and sister-in- law. The Clineschmidt’s resumed control of the Temple Lounge. Matters at the Temple Hotel and Masonic Lodge stayed the same through-out the 1950s and into the 1960s.
The Masons still used the hotel and lodge for a number of events through the years. In 1964, the Temple Hotel was torn down as part of the first phase of the downtown revitalization plan of the 1960s to create the downtown Redding Mall, which wasn’t built until 1972. Today, the only thing left of the Temple Hotel is the basement which was used to store choice wines, bourbon and other alcoholic beverages for sale in the Temple Lounge.

Night Clerk Gone – The Sacramento Union newspaper of Sacramento, May 5, 1907