A farmer by the name of Ephraim Brown, and his wife Lorilla (Lillie) Brown, brought their family out west from Cortland County, New York in 1866 and they settled at French Gulch, Shasta County, California. Ephraim continued to pursue his career as a farmer at their new place. Ephraim and Lorilla remained in French Gulch. Ephraim died in 1875 and his wife Lorilla died in 1901, they are both buried in the French Gulch Cemetery. To this union, seven children were born between 1825 and 1844, respectfully. Five males and two females. Their names are the following:


While some of their grown children wanted to mine for gold. French Gulch was a booming mining community and gold fever was strong there during the late 1860s, which also had a mining district named after the town. Manley Morrison Brown, who is the main subject of this article, was born on February 22, 1838 in New York. He married his wife Lucetta Russell in 1864. Then he registered to vote on April 20, 1867, in French Gulch at the age of twenty-nine. This is where he lived and worked as a miner mining for gold.


Three years later, Brown is living with his own family in Lewiston, Trinity County, California where he was working as a laborer in a local market. At that time, Manley and Lucetta had a daughter born to them named Ella. Manley’s older brother William was also living with them, at the age of forty, and he was noted as a cattle driver. 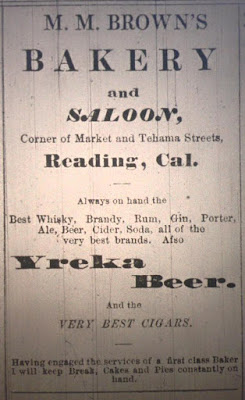 Above: an advertisement for Manley Morrison Brown's Bakery and Saloon at Reading (Redding), California. From the August 8, 1878, edition of the Reading Independent newspaper of Redding.


By the age of thirty-six, in 1875, Manley was employed as a ferryman and living at the town of Buckeye with his family, minus William Brown. His career as a ferryman was short lived and his family relocated to Redding. Two years later, Manley opened a bakery on the corner of Market and Tehama Streets in Redding. His bakery was called M.M. Brown's Bakery and Saloon.


Manley M. Brown sold delicious cakes and pies which he made fresh himself. Brown was also in competition with some of the saloons in town because he also served alcohol, cigars and the locally renowned Yreka Beer at his bar inside the bakery. Then on September 5, 1878, the Reading Independent newspaper reported the following:


"Manly Brown has sold his dwelling, saloon and bakery to Grittner,of Igo. Manly made a nice profit on this trade, but we doubt if he can put the sum received - $2,000 - where it will do more good. We understand that Mr. G. is a first-class baker." (SIC)


While in Redding his daughter Ella attended the Redding Public School. After he sold his business he took some time to travel locally visiting family and friends in French Gulch and Shingletown. Then on, October 2, 1879, the local newspaper mentioned the following transaction involving Manley Morrison Brown:


"B.H Scott has sold his business to M.M. Brown and Hank Whitmore - both enterprising men." (SIC) Brown and Whitmore were now the owners of a new meat market in Redding called the “New Meat Market!”. They sold fresh beef, pork, mutton, pork and corned beef. They were located on Market Street one door south of the Good Templars hall. 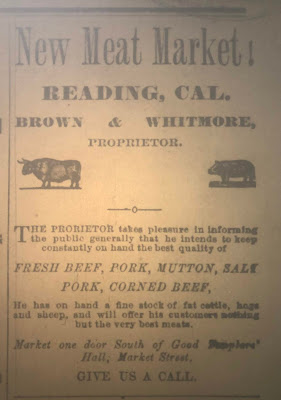 Above: the “New Meat Market!” proprietors: Brown & Whitmore. This advertisement is from the October 2, 1879 edition of the Reading Independent newspaper of Redding.


Later on, in February of 1880, Brown purchased Frank Whitmore's interest and became the sole owner of this meat market in Redding. At the time he was running a first-class butcher shop and he decided to bring in his older brother William L. Brown to assist him. It was William who superintended the business affairs in the shop while he lived in French Gulch.


By the time the 1880 U.S. Census was enumerated on June 4, 1880, they had resettled in a house on Pine Street. Manley lived there with his wife Lucetta, daughter Ella, and their young sons Lewis and Dewit. He also had a servant living in the household by the name of Belle Mallom who was also a cook. It’s more than likely that Manley’s young sons attended school in Redding as well, like his daughter did.

Then in July of 1900, Dunsmuir had a destructive fire that caused approximately $12,000 in damages and he lost his home and an additional building that he owned in that ravaging fire. Both of his places were covered by insurance. The following year, the pioneer died on July 24, 1901 at the age of sixty-three. He is buried in the Dunsmuir City Cemetery next to his wife, Lucetta, who survived him and died in 1914. 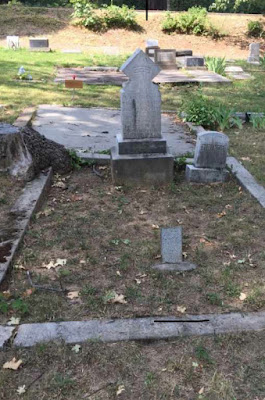 Above: Brown burial plot at the Dunsmuir City Cemetery. Photograph taken by Jeremy Tuggle on May 14, 2016. 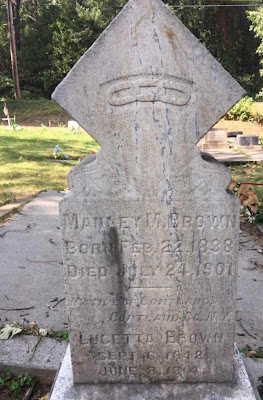 Above: the headstone of Manley Morrison Brown and Lucetta (Russell) Brown at Dunsmuir City Cemetery. Photograph by Jeremy Tuggle on May 14, 2016.