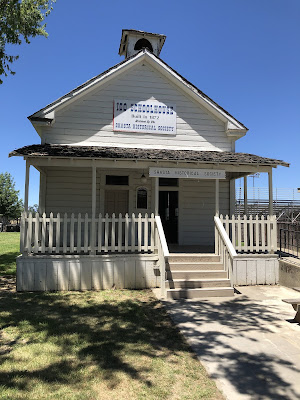 The historic Schoolhouse located at the Shasta District Fairgrounds in Anderson. This photograph was taken by Jeremy Tuggle on June 19, 2019.


In 1872, Igo pioneer and resident Charles N. Kingsbury, an active miner and a native of New York, erected a one room school house which was used as a school in the town of Igo on the property of the present Igo-Ono School. The wood was hauled into Igo from Shingle Creek at Shingletown. It included a well and an out-house.

Learn to write in cursive on the chalkboard. This photograph was taken by Jeremy Tuggle on June 19, 2019.


The school lacked running water and electricity. A wood stove was used to heat the one room school house during the winter months and cold rainy days. One teacher educated the students from grades kindergarten through eighth grade. Some years the teacher taught A board of trustees was established to preside over financial affairs, repairs and to help guide the school into the future. Being a trustee of the school was a paid position just like the teachers did. 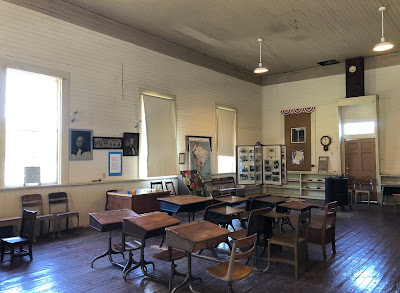 An interior pic. This photograph was taken by Jeremy Tuggle on June 19, 2019.

In 1941 the town of Igo received their first electricity, and so did the school house. The decade of the 1950s brought a new feature to the school house, running water. It was utilized by the Platina Union School District until 1960 when the last class was taught by Mrs. Lucy Plumb. In 1970 the building was relocated by truck to Anderson at the Shasta District Fairgrounds.

Original restoration took place by the Shasta Historical Society between the years 1989-1991. Since that time the organization has made many additional restorations to the building so it can be enjoyed by future generations to come and up to code on safety regulations. The Shasta Historical Society keeps the historic Igo Schoolhouse open during the Shasta District Fair, and some times during Anderson Explodes. 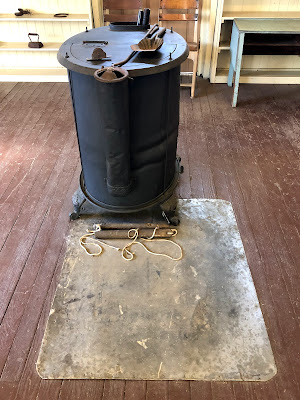 The original stove wood still housed inside the building. This photograph was taken by Jeremy Tuggle on June 19, 2019.

This photograph was taken by Jeremy Tuggle on June 19, 2019.

*Note: Teachers prior to 1901 are not well documented.