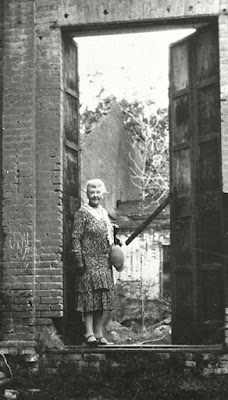 Above: Mae Helene (Bacon) Boggs standing in the door way of one of the south-side ruins at Shasta in 1930. Courtesy of Shasta Historical Society.

Mae Helene Bacon was born to Charles Bacon and Sarah Elizabeth (Smith) Bacon on February 16, 1863, she was a native of Pike County, Missouri. Mae’s father eventually died and then in 1871, Sarah decided it was time for them to live with her brother in Shasta, California. Sarah and Mae boarded a boat which took them to St. Louis on the Mississippi River. At St. Louis they connected with a covered wagon which took them to California.
At the age of eight years old this journey became an adventure that Mae never forgot during her life time. Upon their arrival in Shasta, they immediately moved into the residence of Williamson Lyncoya Smith, an early California pioneer who arrived at Hangtown in Placer County on August 6, 1850. Two years after his arrival in California the pioneer ventured north to Shasta where he settled that year. Williamson was Sarah’s brother, and Sarah enrolled her daughter into the school at Shasta. This is where she continued her schooling and Mae Helene Bacon became a well-educated person.
Eventually, Mae’s uncle became the division superintendent of the California-Oregon Stage Company which operated in Shasta between 1853 and 1888. Then, Williamson Smith also purchased stock within the newly established McCormick-Saeltzer Company of Redding which incorporated as a business on May 7, 1877. Williamson became a founding owner of this general merchandise store. When Smith died of heart failure on May 31, 1902, it was Mae who obtained her uncle’s interest in the McCormick-Saeltzer Company, and she became a heavy stockholder inside the company, this move made her wealthy. 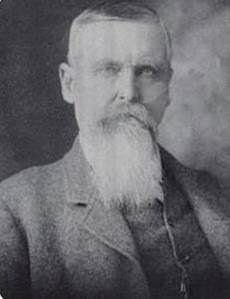 Above: Williamson Lyncoya Smith (1830-1902). He is buried in the San Francisco Columbarium in San Francisco. Aside from being employed by the California-Oregon Stage Company in Shasta he also purchased stock in 1877 establishing the McCormick-Saeltzer Company of Redding. Mae Helene (Bacon) Boggs obtained his interest. Courtesy of Shasta Historical Society.

In 1900, Mae relocated from Shasta to San Francisco and the she met and married Angus Gordon Boggs on August 6, 1900, in that city. Angus Boggs was a prominent hard working and wealthy citizen of San Francisco. According to the 1910 U.S. Census of San Francisco, he was a promoter of mining stock in the area, and he kept supporting his wife until his death on January 20, 1920 at the age of sixty-two. Mae Helene (Bacon) Boggs inherited her husband’s estate and she became wealthier.
On Easter Day, April 20, 1930, Mae Helene (Bacon) Boggs of San Francisco returned to her childhood home in the town of Shasta with her friends Edna (Behrens) Eaton of Redding and her son the late Shasta County Superior Court Judge, Richard B. Eaton. At first glance she was heartbroken to see her home town in disrepair and in ruins. Shasta had been neglected over the years; it was formerly the county seat of Shasta County from March 6, 1851 to May 19, 1888 when the City of Redding became the county seat that day. 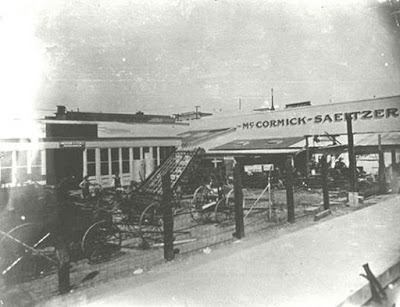 Boggs fondly remembered the town in its glory days and wanted to act fast to preserve its historic district. Her first priority was establishing a historic monument dedicated to the Knights of the Whip, the stage drivers that held the ribbons of the stage on the dusty roads in Shasta County and pay tribute to them. Then on, August 6, 1930, her vision became a reality as a monument was dedicated on the north side of Main Street in Shasta, and a duplicate on Bass Hill. She received additional help from the Native Sons of the Golden West and the newly created Shasta Historical Society which was established on January 18, 1930 in Redding. Together they played an important role in preserving Shasta’s historic district.
Mae Helene (Bacon) Boggs began embracing a passion for historic preservation as she began restoring the former “Queen City of the North” for future generations to enjoy. She began purchasing land in Shasta which contained historic structures on the property. With the help of the above organizations Boggs began the restoration within Shasta’s historic district which included the south side ruins, during the late 1930s. In 1937, the California State Parks Commission assisted them in their effort to preserve the historic town of Shasta, and from this partnership the Shasta State Historic Park came into fruition.
Of course, much more work was underway in Shasta by the above groups and Boggs herself. It wasn’t until June 12, 1950 that Shasta Historic State Park was opened to the public in the historic town of Shasta. The State Park office in Shasta was located in the (old) brick courthouse which was built in 1862 on the north side of Main Street. The court house was restored and preserved as well as it became an intriguing museum with a vast collection of archives and special collections that they received upon donations of local relics related to Shasta’s history.
In 1942, Mae Helene (Bacon) Boggs published a book called; My Playhouse Was a Concord Coach: An Anthology of Newspaper Clippings and Documents Relating to Those Who Made California History During the Years of 1822-1888. This book was an extensive body of work documenting California’s rich and compelling history through newspaper articles and written material. Of course, the early history of Shasta County was not overlooked in it. In San Francisco, Boggs rallied for women’s rights and she became a well-known person in northern California. 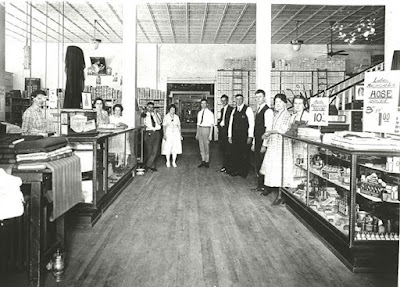 Above: the interior of the second McCormick-Saeltzer Company building of Redding, circa 1921. It was located between Yuba and Placer Streets in Redding. This building stood until January 13, 1940 when it was destroyed by fire. Courtesy of Shasta Historical Society.

The name of the future dam site was heavily debated some of its early name proposals which were suggested by the Federal Government were the following: Coram Dam, Kennett Dam and McColl Dam. It was Mae Helene (Bacon) Boggs who named the dam- Shasta Dam, and she also named the adjacent lake, Shasta Lake. She named these important places after the town of Shasta. Shasta Dam was engineered by Frank T. Crowe the owner of Pacific Constructors Incorporated, and construction began in 1938 and it’s construction was completed in 1945. When the Bureau of Reclamation held their grand opening for Shasta Dam, they invited Mae to attend the ceremony. 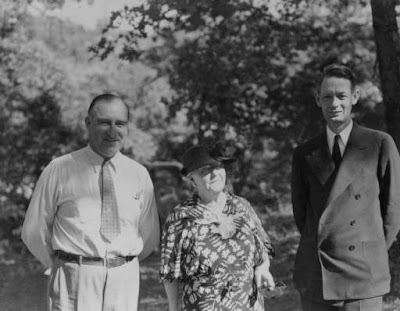 At the present (Old) Shasta may be referred to as a ghost town by some people, yet it is a place of living history. Boggs had lived to see her dreams become a reality as she died at the age of one hundred years old on August 1, 1963 in San Francisco. She was a tremendous friend and benefactor of the Shasta State Historic Park. The Shasta State Historic Park now includes numerous historical land marks and a working museum which employs its own park rangers under the California State Park System.
Due to the efforts of the pioneers before us who made Shasta their home and succeeded in thriving businesses in that town, the town has reached a thriving population of 1,771 people over time, living amongst this state park. Shasta is accessible by Highway 299 West in Redding which intersects Main Street at Shasta and leaves Shasta heading towards Weaverville. From Weaverville it’s accessible from Highway 299 East and intersects Main Street at Shasta leaving Shasta towards Redding. It’s a short fun-filled family trip if you choose to go, and a visible reminder of the early gold rush days in Shasta County.
Today, there are numerous places named after this philanthropist and pioneering woman, Mae Helene (Bacon) Boggs. One of them is a government building at 2460 Breslauer Way in Redding called the Mae Helene (Bacon) Boggs Building. There are also two special collections of local historical relics named after her, most notably they are the Boggs Collection in the Redding Library, and the Boggs Collection at the Shasta State Historic Park Museum.
RESOURCES:
W.L. Smith Is Taken To The Crematory - The Free Press newspaper of Redding, June 2, 1902
Erecting The Memorial In Old Shasta - The Courier-Free Press newspaper of Redding, April 17, 1931
My Playhouse Was A Concord Coach, an anthology of newspaper clippings and documents relating to those who made California history during the years 1822-1888, by Mae Hélène Bacon Boggs. Published by Howell-North Press ©1942
In Memory Of A Famous Knight of The Rein by Harry P. Bagley, the Sacramento Bee newspaper of Sacramento - October 17, 1942
SP-033 Smith, Williamson Lyncoya Pioneer Plaque
Shasta Historical Society Pioneer History - W.L. Smith dated January 20, 1943
Mrs. Boggs Dedicates Her Life To Pioneers by Ward Bushee, the Redding Record Searchlight newspaper of Redding - December 27, 1949
Mae Helene Bacon Boggs 1863-1963 Pioneer-Philanthropist-Centarian written by Judge Richard B. Eaton, The Covered Wagon 1964, published by Shasta Historical Society, pages 42-45.
Shasta: The Queen City by Mabel Moores Frisbie and Jean Moores Beauchamp, published by California Historical Society, ©1973.
Shasta State Historic Park Brief History and Tour Guide, published by Shasta State Historic Park, ©July 1985
Boggs gave California art collection to Shasta State Park by Jack Frost - Record Searchlight newspaper of Redding, January 14, 2013
For a Famous Name, We Owe Thanks to Mrs. Boggs. By Marc Beauchamp - Record Searchlight newspaper of Redding, August 26, 2009
California State Parks Museum Collections