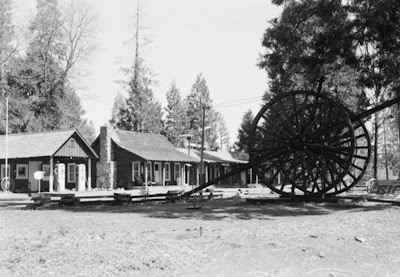 Above: Big Wheels Restaurant, date unknown. Courtesy of Shasta Historical Society.
Who remember's Big Wheels Restaurant at Shingletown? It was in 1939 when Harry Abbott established it after opening a trading post along Highway 44, Abbott included a set of big wheels as shown in the above photograph which would forever become its trademark and it help promote his establishment to passing motorists. You can see that the big wheels were taller than his buildings on the property.
Abbott purchased the big wheels in 1936, three years before his establishment's grand opening. Abbot was a natural businessman who also founded a gas station, grocery store, bar and a dance hall on the property. You might remember the large circular saw in the lobby of the restaurant? It seems to be a popular memory for a lot of people who ate there. Abbott eventually sold the business to new owners.
Various owners had operated this popular eatery and among them were Carole and Richard Smith, under their ownership an extensive gift shop was added. The Smith’s sold out to Dave and Mary Thomas, and they owned it for for a good ten year period. The place was bought numerous times after the Thomas’s sold out.
Then on, January 1, 1997, fire destroyed the Big Wheels Restaurant which left it's original chimney standing. The popular eatery was rebuilt, and yet to some people it just wasn't the same, and on May 16, 2005, a second fire ravaged the property which destroyed everything inside the new restaurant portion and left the chimney standing again. Eventually, it had passed into the ownership of Mike Dastrup. The only item left to view on the property is the large brick chimney fire place. At the present date, this chimney still stands on this property in Shingletown. 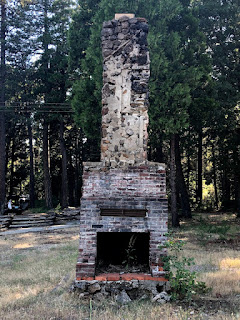 Above: the large brick chimney fire place still stands at the site of Big Wheels Restaurant off Highway 44 at Shingletown. This photograph was taken by Jeremy Tuggle on June 28, 2018. 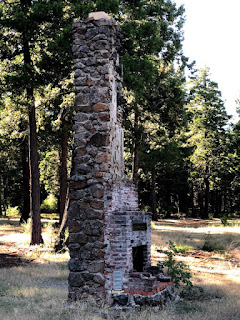 Above: a side view of the large brick chimney fire place. This photograph was taken by Jeremy Tuggle on June 28, 2018.
RESOURCES:
Shingletown Businesss Directory
Shingletown VF 979.424 Towns on file at Shasta Historical Society
Menu's From Various County Restaurants - VF 642 on file at Shasta Historical Society
Posted by Jeremy M. Tuggle at 12:53 PM