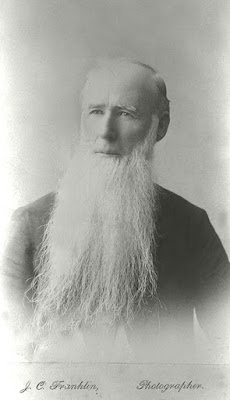 Pictured above is the honorable Judge, Aaron Bell with his iconic white long beard which gave him the nickname of Billy Goat Bell. This photograph was taken by John C. Franklin, early 1890s. Courtesy of Shasta Historical Society.

Aaron Bell was born in Center County, Pennsylvania on December 2, 1832 to Christiana (Evans) Bell and John Bell Jr., he was the eldest of five children followed by: Edmund Bell, Jesse Bell, Jane Bell and Joseph Bell. Arron became well-educated and he graduated from Duff's Commercial College in 1851, at the age of nineteen, where Aaron majored in law. However, additional perks in California attracted him to venture west during the following spring when he was lured by the placer mines of that state. Aaron Bell arrived in San Francisco in April of 1852.

After a short stay in the city he departed San Francisco heading north towards El Dorado County, where he had learned that the mining scene was booming. He made plans to settle in Hangtown, which is now Placerville. This is where he mined for gold. He became popular amongst his peers while working at the placer mines. Eventually, Bell was chosen to become a deputy to various county positions in that area over a sixteen year span. During his residency there he also became a City Clerk of Placerville. The District Court of El Dorado County admitted him into the Bar in 1864, and he became a professional lawyer. After he was admitted into the Bar he practiced law in Sacramento.

As Bell's career took off he began pursuing cases pertaining to the United States land law. Then in 1871, the pioneer relocated from Sacramento to Shasta where he accepted a paid position as Registrar of the United States Land Office, which was located on Main Street. He still practiced law in Shasta opening an attorney’s office inside the above building. This was a year before the California & Oregon Railroad, a division of the Central Pacific Railroad, established a new town upon Poverty Flats called Redding on June 15, 1872. Bell held this position in Shasta for several years. At Shasta, on January 1, 1874, he married Julia Fipps, a local school teacher, and together they lived in a house on a hill in Shasta at the end of McDonald Alley. Together they began raising a small family of their own.

Above: An advertisement for Aaron Bell, Attorney At Law. His office was located in the United States Land building on Main Street in Shasta. This advertisement is from the January 20, 1877 edition of the Shasta Courier newspaper.

Then on, May 5, 1877, the Shasta Courier newspaper of Shasta reported the following about Bell:

In July of 1879, Aaron Bell received the nomination for Judge of the Shasta County Superior Court on the republican ticket at Shasta. If he won this election he would become the first Superior Court Judge of Shasta County. At that time, Shasta was the county seat, and it was a position he sought after, however, he knew he had to resign as Registrar of the United States Land Office. Then on, Saturday, July 26, 1879, the Shasta Courier newspaper reported the following about Aaron Bell:

“Aaron Bell having received and accepted the nomination for Superior Judge, has forwarded his resignation as Register of the Shasta U.S. Land Office to Washington.- Bell has made a splendid Register, his record as a Government officer is straight as an arrow, and his decision on contested points of land law have invariably stood the test when submitted to the exacting and learned heads of the land department at Washington. We regret to lose him from the place which he has so ably filled, but the position to which he aspired is one which demands the same qualities he has shown in the discharge of the duties of the office he resigns.” (SIC)

Aaron Bell was succeeded by William E. Hopping who became the new Registrar of the United States Land Office. Bell chased his dream of becoming the first Shasta County Superior Court Judge and took part in many campaign speeches along the way. Bell had experience as a lawyer but not as a judge, and his opponent was none other than democratic District Court Judge, Alexander M. Rosborough, a native of South Carolina. Both men were well-respected and popular. After the election ended the registered voters voted, and then the votes were counted. When the final vote was tallied the results showed that Bell swept his competition with an impressive 1,041 votes while Judge Rosborough carried 539 votes. The Honorable Judge, Aaron Bell began serving the position, honorably, until the year 1890.

During the week of January 1, - 10, 1880, Dr. George Silverthorne and Timothy Conklin made a real estate transfer to Judge, Aaron Bell, for a water ditch known as the Horse Creek Ditch in the Pittsburg mining district for a consideration of $200.00. Apparently, Bell owned some mining claims nearby which demanded the use of water to be conveyed from Horse Creek to his mining claims. The water helped him extract the lucrative ore he sought after. During 1881, Judge, Aaron Bell was affiliated with the Hogue Worley Ditch Company who owned a number of water ditches in the Pittsburg mining district. One of the ditches they owned was the Hogue Worley water ditch located on the west side of Horse Creek in the that mining region.

A year later, Judge, Aaron Bell located two placer mining claims which yielded him lucrative results while he worked them during his lifetime. He named first one the Shasta and the second one the Maine. The Shasta was located on May 26, 1882, while the Maine was located on June 13, 1882. Both of these placer mining claims were in the Shasta mining district near Shasta. Five years later, on September 4, 1887, the town of Redding was incorporated as a city and then in 1888 a major county wide vote was held as Shasta the Queen City of the North defended its position as the county seat of Shasta County. Eventually, Shasta was dethroned of the position it held and the City of Redding won the election. Then on, May 19, 1888, the City of Redding became the county seat of Shasta County. It was Judge, Arron Bell who ordered the removal of the county seat to Redding after the vote was held.

In November of that year, Judge Bell began advertising his house and property in Shasta for sell in the Republican Free Press newspaper of Redding. He relocated to Redding with his wife Julia, and their children, Jessie Bell, George Bell, and Harvey Bell, to their new location at the corner of Placer and West Streets in Redding. They were happy to be in their new residence, this building was much larger than their former Shasta residence and it contained nine rooms. During November of 1890 Bell’s term as the Superior Court Judge of Shasta County ended. Bell was succeeded by republican candidate, Edward Sweeney, who became the second Shasta County Superior Court Judge. He returned to practicing law and he opened an attorney’s office inside the Northern California Bank building in Redding. Bell continued dealing with cases pertaining to the United States Land law, as well as additional cases.

Then on, December 17, 1899, his middle child George Bell died at the age of twenty, it was a tragic loss to his family. George was buried in the Redding Memorial Park. Prior to 1899, Bell relocated with his wife Julia to a newer home in Redding when he donated his nine room house on the corner of Placer and West Street to be used as a school for students of the first Shasta County High School in Redding, this high school had no relation to Shasta Union High School which was established in 1923, completely different. Classes were held in his former home until 1901/1902 when a newer building was completed and stood until 1942. It’s not known where Aaron Bell moved to after donating his property to be used as a school. The Bell’s remained in Redding.

Bell became a Director of the Board for the Pioneer Gold, Silver, and Copper Mining Company which was established by Henry C. McClure, a miner, who lived at Copper City, on July 2, 1902. The rest of the Directors of the Board for the above mining company included: Henry C. McClure, Orson E. Nash, Thomas Green, and John R. Hall. They would begin extensive work on the well-known Recorder and Town Creek mines at Bully Hill in the Pittsburg mining district which assayed from $3.50 to $7 in gold and silver that year. Aside from being a lawyer and a mining man, the honorable Judge, Aaron Bell enjoyed a number of fraternal society’s as well. In April of 1855, he joined the Order of the Odd Fellows in El Dorado County, when he relocated to Shasta in 1871 he transferred into the Shasta Lodge of Odd Fellows No, 57, then in December of 1878, Bell joined and became a charter member of the Ancient Order of United Workmen, Shasta Lodge and on May 18, 1881, he joined and chartered the Shasta Council, No. 582, of the American Legion of Honor. In 1882, Bell had been elected as Vice Commander of the American Legion of Honor for California. After holding the position of Vice Commander of this organization he was elected in April of 1883 as Grand Commander of the American Legion of Honor for California the highest office a member can hold within that fraternal society. It was an honor he enjoyed having.

The honorable Judge, Aaron Bell died on Saturday, March 21, 1903 in his Redding home after a brief illness. His funeral was held on Monday, March 23, 1903, and out of respect for Shasta County’s first Superior Court Judge, local government offices and businesses remained closed as his funeral was conducted by the Odd Fellows with assistance from the Ancient Order of United Workmen. It was one of the largest funerals ever held in Redding up-to-this-date. He was buried in the Redding Memorial Park.

To conclude this article, the Shasta Courier newspaper on Saturday, March 28, 1903 reported the following about the deceased pioneer: “The estate of the late Aaron Bell is estimated at $10,000, mainly in stock in the McClure and Mt. Shasta Mining Companies.” The honorable Judge, Aaron Bell also at one point in his life owned a box, shingle and lathe factory which did remarkable business in Shasta County as noted in his pioneer plaque file at the Shasta Historical Society in Redding. 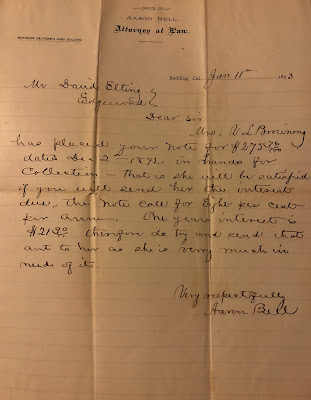 Above: An Aaron Bell letterhead. The Office of Aaron Bell, Attorney At Law, in the Northern California Bank Building in Redding. A note to Mr., David Elting of Edgewood. Dated January 11, 1893 in the hand writing of Aaron Bell. From the collection of Jeremy Tuggle.