Memories of the Greyhound Bus Station

Memories of the Greyhound Bus Station 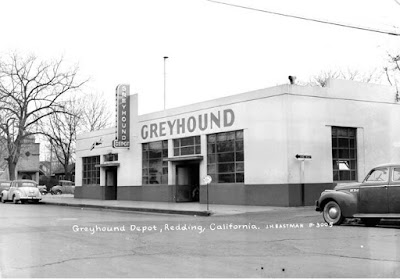 
When you walk into a home or a business, do you ever wonder what stood there before?

For a moment, think of the Chamber of Commerce with its red and white awning located on the corner of Pine and Butte. The Chamber is in the White Building, as it has come to be called, along with Wild Card Brewery and Sierra Pacific. Windows on the ground floor, and home to several residents on the second floor. But what was at that location before the White Building? Many of us immediately respond, “The Greyhound Bus Depot!”

The 1930s was a rough decade for the Pacific Greyhound Lines as two unfortunate Greyhound Bus accidents occurred near Redding. The first incident, in 1932, happened when a bus traveling from Red Bluff to Redding struck a tree and rolled down an embankment. A second accident in 1937, which gained considerably more notoriety, resulted in the deaths of seven. This accident occurred at Shiloah Springs, about forty-eight miles north of Redding in the Sacramento River Canyon, when a bus traveling north took a sharp turn, overturned, and caught fire.

In 1939, the Greyhound Bus Depot moved from its California Street location to 1323 Butte Street. The new building was built in the Art Deco style and at that time did not encompass the entire footprint it would eventually occupy. A picture of the Greyhound Depot dated around 1945 is above. It shows the Depot did not extend all the way to Pine Street and that the Greyhound dog had yet to be added to the Greyhound Depot sign. 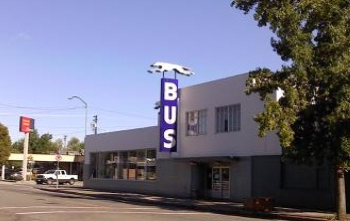 Above: façade of the Greyhound Bus Station on the corner of Butte & Pine Street, courtesy of aNewsCafe.com.

Recently we posed the question on Facebook, “What memories do you have of the Greyhound Bus Depot?” The most common response was the memory of the pay toilets upstairs that cost a dime. Some recalled the stairs leading up to the restrooms and green tile. The restaurant located in the Bus Depot received many positive comments. One person remembered it as being cafeteria style and getting food served on a tray as you walked through the line. Another shared that when her aunt and uncle made the trip from Santa Clara to Eugene, they always enjoyed their dinner in the cafeteria at the Redding Greyhound Depot. Two people remembered enjoying the photo booth. Still another told of her father being a driver for Greyhound and how she and her mother would meet the bus at the top of Sulfur Creek Hill, so she, at 4 years of age, could ride the rest of the way into town with her dad.

There were memories of joy and sadness associated with the Bus Depot for many of our readers. One story describes the warm memories of a young woman meeting her future husband for the first time as he got off the Greyhound bus. Another individual recalled the only time he met his grand-father was for a few short hours at the bus depot and how sad his mother was when his grandfather left on the bus. Several spoke of being put on the bus as a child during the 50s and 60s and traveling to a relatives’ house alone and what a different era it was then. Some recalled getting on the bus after enlisting and heading to basic training. One father remembers one of the worst days of his life as the day he put his son on a Greyhound bus to complete his second tour of duty in Vietnam. Still others relied on the bus to get to and from college.

The depot closed in 2010 when the decision was made to move it to the new RABA station by the railroad. The depot had been in a steady decline over the years with one reader sharing that it was not a place where one felt safe. The Redding Greyhound Bus Depot located on Butte Street was demolished in 2013. The Shasta Historical Society has the honor of being the current owner of the Greyhound sign that once graced Pine Street. The Society’s hope is to eventually find a downtown location where the public can once again enjoy the beautiful, iconic neon Greyhound Bus Depot sign.

Jake Mangus, Chamber of Commerce CEO, whose office now sits on the site once occupied by the Greyhound Bus Depot, shared, “It is important that we honor our treasured local history. The fact that many people in Redding have personal stories of their time at the Greyhound Bus Depot, brings history to life and makes it all the more important to tell the story of this place." We couldn’t agree more. 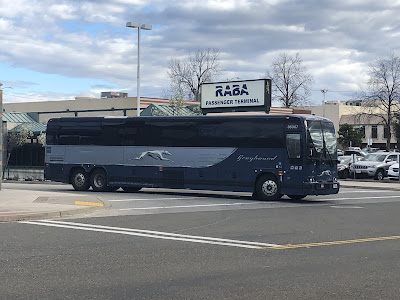 This is the present site of the Greyhound terminal. Photo above by Jeremy Tuggle, taken March 12, 2019, Yuba Street, Redding.


1925 City of Redding Directory (In private collection of Ralph Hollibaugh) Not listed.

Greyhound Lines To Take Over All The Transit Companies – The Courier-Free Press newspaper of Redding, April 30, 1930

New Stage  Depot To Be Erected At Pine And Butte - The Courier-Free Press newspaper of Redding, December 8, 1938